Android VS iOS - Which Mobile Operating System Should I Prefer to Play Mobile Slots?

Android VS iOS - Which Mobile Operating System Should I Prefer to Play Mobile Slots?

Playing slot games on mobile devices is one of the most entertaining encounters, and everyone would love to enjoy a piece of the cake. The numerous slot games for mobile phone that exist provide the player with great convenience because they are no longer limited from where they can enjoy the game. Thanks to this flexibility, an increased number of people are adopting slots as their preferred online casino games.

Even as the slots' popularity increases, one cannot help but notice that there are some differences between the experience on Android and iOS for some games. Of course, some of the slot machines are accessible on both Android and iOS operating systems without any discrepancies. However, for most games, they would be exclusively available either for Android or iOS. That leaves you wondering which mobile operating system would best satisfy your desire to play slots?

We can look at this question from different perspectives to provide a comprehensive response:

Slot games tend to come sooner on iOS than Android. If a particular slot is meant to be accessible on both operating systems, you will typically first find it on iOS before its Android version hits the market.

Different explanations have emerged to make sense of this trend. For one, developers find it simpler to make games for iOS because it has fewer OS models - iPads and iPhones.

On the other hand, when it comes to Android devices, the game developers have to create a respective app that works seamlessly with different Android phone models. That means making slot games available to Android users may require the developer to spend more money. Thus, iOS peers end up accessing particular games before their Android counterparts.

Quality Over Quantity of Slot Game

Apple has one of the strictest rules regarding the games published on its App Store. These rules took place in 2016 and have seen thousands of outdated software that do not meet specific requirements uninstalled. The focus of these rules was to prioritize quality gaming instead of quantity, ensuring its players have access to good-quality games.

On the other hand, Google tends to have a freestyle approach to the kind of slot games published on its platform. That means you may end up having so many slot machines on Google Play Store, but most of these could be pointless. Moreover, in some cases, you may not be able to replay some of the games due to their endless glitches.

If you are looking for top-quality slot machines, iOS could be your best bet. However, if you would love to have access to a variety of slot games that may not be available elsewhere, Android would do for you.

Android Does not Have Some Crazy Restrictions 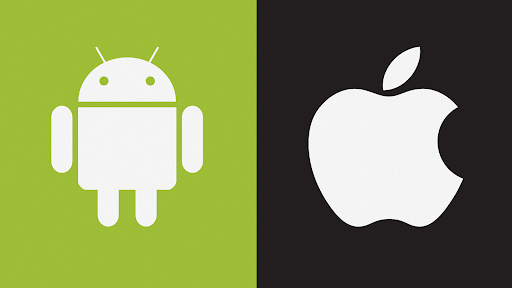 Apple is notorious for occasionally implementing rules that remove thousands of applications from its App Store. That means you may have enjoyed a certain slot game just a few days ago, only for you not to find it in the marketplace. Your favorite iPhone slot could disappear any day.

On the other hand, Android users could have access to a slot machine for as long as they want. That's because Google hardly interferes with applications published on its marketplace unless when necessary. Thus, if you enjoy a given Android slot game, you can be confident that it would be around for a long time.

We have already seen that you can search for good titles on both Android and iOS. What if you access the same slot on an Android device and iPhone? Where are you likely to have a smooth gaming experience?

Generally, iPhone users have a better gaming experience than Android and encounter fewer bugs. However, even for high-end Android devices, it is possible to have a few incidences where your phone freezes in the midst of a hotly contested slot machine.

To wrap up the entire comparison, both Android and iOS mobile operating systems are good for playing slots. The superiority of one OS over the other depends on what you are looking for. For instance, if you want access to a variety of games, Android would do for you. On the other hand, iOS boasts of listing only top-quality slot machines.