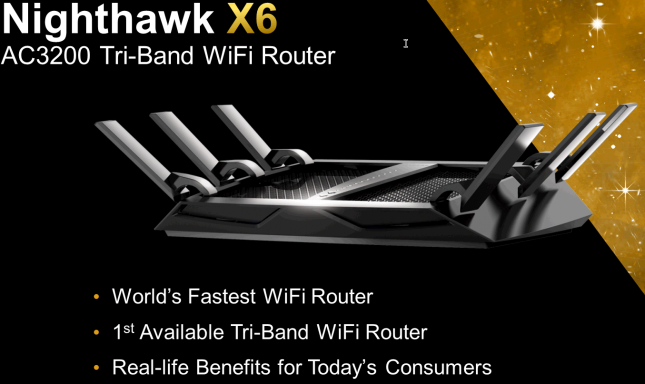 So what are the benefits of a tri-band wireless router? Well, for starters, the X6 has two 5GHz bands and one 2.4GHz bands, which will deliver, theoretically, 3.2Gbps transfer speeds. However, don't expect the router to do this, as the device will not use all of the bands simultaneously to transmit data to your device. It will most likely allocate the different bands to your different tech that you have hooked up to it.

Let's say you're rocking an older laptop with lower WiFi standards than today's more recent products, so the 2.4GHz will be allocated to a lower intensity device. The other two 5GHz bands would be used for devices that use more bsndwidth, naturally.

Nighthawk X6 also has a built-in USB 3.0 stick that supports DLNA and AirPlay streaming, which effectively turns the router into a media hub as well. It packs 5 Gigabit Ethernet Ports, four LAN and one WAN, and it runs on a 1GHz dual-core processor. It's price tag is $299.99 and it's really worth that price.


Please Follow Our Community Guidelines or your comments will get deleted or blocked
Description
youmobileorg
Posts: 5452