Samsung Galaxy S7 vs. the LG G5: Which one has the better Always On display?

Samsung Galaxy S7 vs. the LG G5: Which one has the better Always On display? 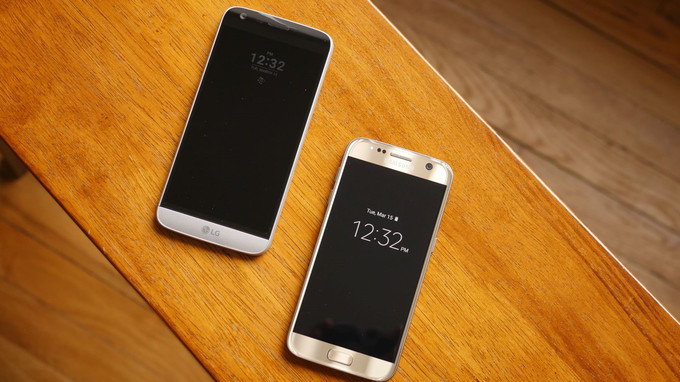 You are probably familiar with the newly introduced Always On displays already, so let's get into the battle of the flagships right away. However, keep in mind that the LG G5 used while comparing the two was a pre-production unit.

If you are outdoors and the weather isn't too sunny then you would be hard pressed to see a difference between the two Always On displays as they are both perfectly visible, even from a distance. If however, the condition outside is quite sunny and you are trying to check out the time, date and notifications, the LG G5 loses by a huge margin to the S7. The S7's AMOLED display is simply brighter, more defined and clear compared to the IPS-LCD screen of the G5. In fact, you will need to look at the G5 at almost a 90-degree angle under bright conditions to even make out what's on the secondary display, while the S7 offers much better viewing angles.

In terms of usefulness, the LG G5 will win simply because of the fact that its secondary display supports notifications from third party applications as well, whereas the S7 is only capable of showing notifications from Samsung apps.

Samsung has added a lot more customizability to its secondary screen when compared to its South Korean competitor. The S7's Always On display supports stock pictures and skins for clocks as well as the calendar. The notifications change their place of appearance on their own as well to prevent screen burn-ins (a result of static images being shown on a particular space for too long a time at a single stretch). The only significant customization that LG offers is the ability to add a personal signature that can replace the traditional time display.

Although we love LG's equal treatment of all apps installed on it, credit must be given to Samsung for making better hardware and adding more customization. The S7 would win this hands down if only it supported third party apps like the G5, but as it stands now, the better Always On display among the two must be decided by the user and his/her priorities. So, which of these features are more important to you?