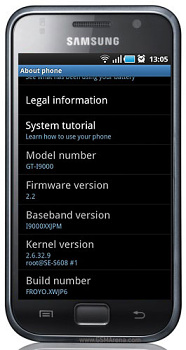 As you probably know last week Samsung released the official update that takes the I9000 Galaxy S to Android 2.2 for the Scandinavian region. But just as we thought that worldwide availability is a matter of days now, the company pulled the files from it servers.

There is no official statement yet so its unclear what are the reasons behind this move but unstable behavior seems the most probable reason. A number of users reported that their Galaxy S units became laggy and experienced lots of bugs after the update and if Samsung found the reason to be within their own code, it might have returned it to their developers for some more work.

At any rate Samsung UK branch has just confirmed via Twitter that they will be releasing the Galaxy S Froyo update in early November with carrier-specific versions following after that. Lets hope they get everything right this time and Bo More Bugs!