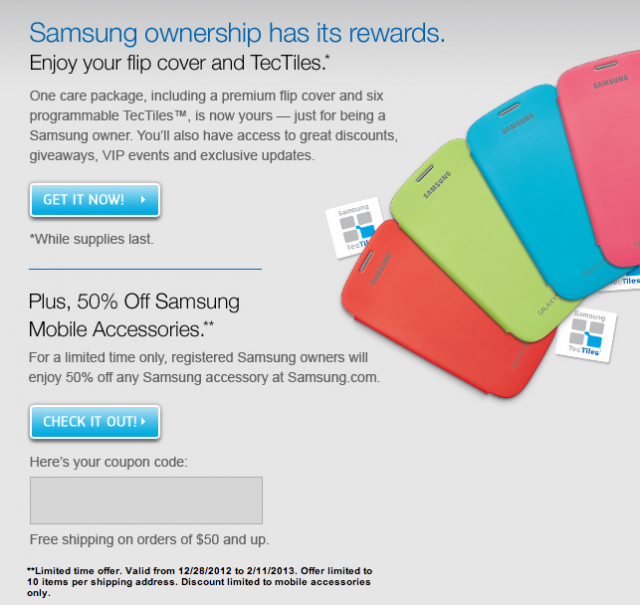 Samsung giving away a FREE flip cover for your Galaxy Note 2 or Galaxy S 3 ($40 value, from their store), as well as 6 tectile NFC stickers ($15 value)!

Click link below and enable the App (protip, select "Only Me" for who can see this activity):

Revisit link above, select your device and then register your device. You should get an email for the free flip cover and 6 tectile NFC stickers.

You will also get a 50% off coupon for your TOTAL order (up to 10 items) at their website! (great for the allshare dongle or Samsung's proprietary MHL adapters)

Ways to obtain your IMEI/HEX #:

Be quick, this is a $55 value if you bought those two things from their store, it will go fast!:

Offer valid, while supplies last, through January 31, 2013. Limited to the first 12,100 eligible Galaxy SIII owners and first 12,100 Galaxy Note II owners who are legal residents of the 50 US & DC, 18 or older. Void where prohibited

The Next generation of the Galaxy X Cover coming soon
Samsung According to SamMobile, the second generation of Samsung Galaxy X Cover will be shown off at Mobile World Congress 2013 in Spain.  The Galaxy X Cover 2 will come with 2 colors, the Titan Gray and the Black/Red.

The listed specs is as follows.

Samsung's roadmap was revealed by Technobuffalo this morning, here we can see what Samsung has in store for us for the next couple of months.  Starting off with the Galaxy Note 8.0. As previously rumored, the Galaxy Note 8.0 comes with Android Jelly Bean, a 1280 x 800 display, S Pen, quad-core 1.6GHz processor, 2GB of RAM, 16GB of internal memory, MicroSD card support, 5MP rear camera, and a 1.3MP front-facing camera.