It looks like HTC One will not be available on March 15th or if it will be; only a few units might possibly be distributed to retail stores because of parts shortage. As if it's not enough, HTC is actually experiencing shortage of two types of components and these are the camera module and the voice coil motor.

Initially, only an average of 1M units will be shipped in the next two months because of this shortage. Let's hope that HTC will be able to bounce back because, like it or not, there are many who are rooting for the HTC One and are actually labeling it the underdog versus Galaxy S 4 and other leading phones in the market.

This can actually be a good move by the Taiwanese company because they would not want to be overshadowed by the possible success of the Galaxy S 4 launch on March 14th. Introducing the HTC One at a later date will make it possible for them to gather more steam. This is HTC's final chance to redeem their brand and they have to make it right and timing is also quite important.

Tags: htc one may get delayed due components shortage

Focus Taiwan reported HTC One's major set-back on the production of its super important ultrapixel camera components. This comes at a time when HTC needs to be at its most creative and timeliest to redeem itself following years of dwindling sales of its devices.

Insiders reported that the company's key people were informed by their suppliers that two major components of their ultrapixel sensor were extremely limited and will reduce the production of HTC One units to less than half of what was planned.

Consequently, HTC units that were promised to different market segments will also be decreased, leading many to believe that delay in launch of the HTC One to other markets is inevitable.

It could also just be a marketing ploy, which many really hoping that it is. The HTC One was originally slated to be released on March 15th, a day after the extravagant launch of the currently MOST anticipated phone in the market, the Samsung Galaxy S4. It just makes sense to let the hype over the other phone die down first, before introducing their flagship device, for less distraction possibly.

HTC One Delivery for Verizon will get delayed
HTC

HTC One is experiencing a major logistical nightmare with the shortage in components that are used to make its Ultrapixel camera. For this reason, the HTC One will not be launched by Verizon anytime soon. Furthermore, it will only be delivered to the carrier after all other US carriers like AT&T, T-Mobile and Sprint have all received their HTC One units. Talk about a major delay!

HTC also has not revealed a specific date of launched. What was originally slated on March 15th was moved to the 29th, and who knows when? Some see this as a move to possibly dispel residual Samsung Galaxy S 4 hype, since the Korean device will be launched a day before.

Verizon might also prevent losing HTC clients by launching other phones by the manufacturer instead. There are talks that it might introduce the HTC One as a Droid device. It appears that Verizon will not go without offering some kind of an HTC flagship that has an Ultrapixel camera and the works. 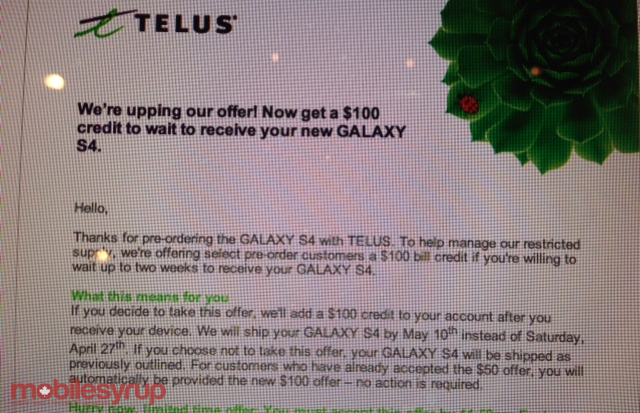 Samsung released an official statement explaining the global delay in the delivery of the Samsung Galaxy S 4. Some carriers are even offering free credit for those who will wait for the device even further in May. According to the Company, this happened because of "overwhelming global demand" for the said smartphone.

Due to overwhelming global demand of Galaxy S4, the initial supply may be limited. We expect to fulfill inventory to meet demands in the coming weeks.

Pre-order for the Galaxy S 4 was also stellar where most if not all of the carriers sold out their stocks even before the phone is released and just recently, Samsung admitted to the limited production of the Exynos processor, which is possibly why the total number of supposed Galaxy S 4 fell short.

T-Mobile, Sprint, and Verizon have all released statements about the delay on the release of the phone. Pre-order customers are naturally not happy about this but if there's someone who's rejoicing at the S 4 delay, it's HTC One. It has recently shipped 300K units last month and this gives it ample time to capture more of the market before Samsung Galaxy S 4 takes it all away.

Android 4.2.2 update for Samsung Galaxy Note II and S3 might be delayed
Samsung

According to SamMobile, Samsung has delayed the Android 4.2.2 update for the Note II and Galaxy S3. The reason seems to be the new version of TouchWiz that needs to be tested on the handsets.

It's unclear which new features will be coming to the Samsung Galaxy S3 and Galaxy Note 2 once the update is eventually rolled out. However, with Sammobile claiming that Samsung is looking to bring the latest version of Touchwiz to these two ageing handsets, it's likely that new software features such as Smart Scroll and Smart Pause will appear in the update.

Speculation also suggests that Samsung will bring updated camera features, including Dual Shot mode, to the two older handsets, as well as some of its latest apps such as S Translator.

A week ago Samsung began the process of upgrading last year's flagship phone to some more recent form of the Android operating-system, but after it had been launched many users' experienced problems and today the Samsung Galaxy S3 Android 4.3 Jelly Bean update continues to be pulled as well the Galaxy Note 2 update going to be postponed.

Because the update was initially launched by Samsung the update has arrived at more regions however it soon grew to become apparent that some customers appeared to be hit with issues. The Android 4.3 Jelly Bean update for that Samsung Galaxy S3 yesterday hit the United kingdom also it was readily available for our unlocked form of the unit with an OTA update.

Other problems included a patchy Wi-Fi connection or the handset locking up completely needing the battery to be pulled to restart the device. Considering the handset has been sitting on Android 4.1.2 for a while now it's a poor performance by the company when you take into account how long Android 4.3 Jelly Bean has been available.

The update had also reached some carrier versions of the handset in the UK that included O2 and Three, and you would have thought these have been pulled as well and hopefully Samsung quickly provides a fix for those that have already installed the software and commences the rollout of the update.

Have you install the program and also have had issues with your Galaxy S3?