Apple said revenue from the iPhone jumped 28 percent during the crucial holiday shopping season. The results arrived with an unusual level of anticipation, even for a company as high-profile as Apple, because of anxiety among some investors about Apple's ability to sustain its growth and create new hit products. Apple's stock has lost about a quarter of its value since September, erasing more than $170 billion of its market value. 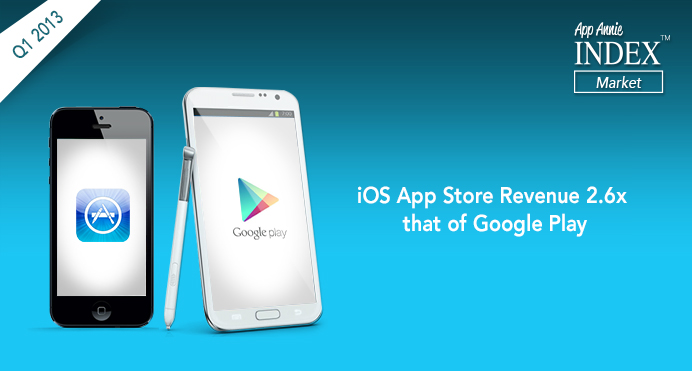 Google Play Store revenue is up 90% compared to first quarter last year, according to App Annie. This report also shows that 90% of the applications are also available in the Apple App Store, which somehow shows the increase in the number of Android device users as well.

Various graphs were presented that shows Google's stellar 2013 performance-and the year's not even halfway yet. Japan tops the countries that posted the most growth in application revenue, while South Korea and the US come in second and third places. However, when it comes to app downloads; the US still leads the pack with South Korea falling in second place.

Furthermore, according to the research, games account for 80% of Google Play applications revenue and others such as communication, productivity, tools and paid social apps make up the rest of the 20%. However, Apple still posts higher revenues than Google when it comes to applications but it does not mean that Google is far behind. In fact, it's quickly catching up and Android developers are the happiest!