Costco planning to sell the Galaxy Nexus for 289 USD

Looks like Costco gearing up to sell the Samsung Galaxy Nexus, according to this inventory screen we just received. Price is slated at 289.99 USD. But like anything else of this nature, it is not official until its official.

But we would note that only a Verizon version is listed here we are still unsure if there is going to be an HSPA version available in the US anytime soon. But importing will always be an option.

This week it was revealed by none other than NXP that they were the ones that have been in the Nexus S from Samsung powering its NFC component and will also be in the Galaxy Nexus, they therefore providing the NFC for both Google hero devices. This is not a gigantic deal for those of you that just want your devices to work, not caring about whats deeply embedded in the devices to make them work so spectacularly, but for the Android need-to-know crowd out there, you will need to know this: the same NXP PN65N solution used in the Nexus S will now be used on the Galaxy Nexus.
Take heed, Android lovers, because not only will this component be working with you for NFC for your Google Wallet, but with the brand new Ice Cream Sandwich feature known as Android Beam. You can find out more about Google Wallet in our hands-on look of the application that came out for Nexus S a few weeks ago and Android Beam in two separate places. We first found out about Android Beam at the introduction to the Galaxy Nexus in Hong Kong last month, then just last week we published a Q and A session with several Android authorities that had them speaking a bit more in-depth about the possibilities with the service for developers in the field. 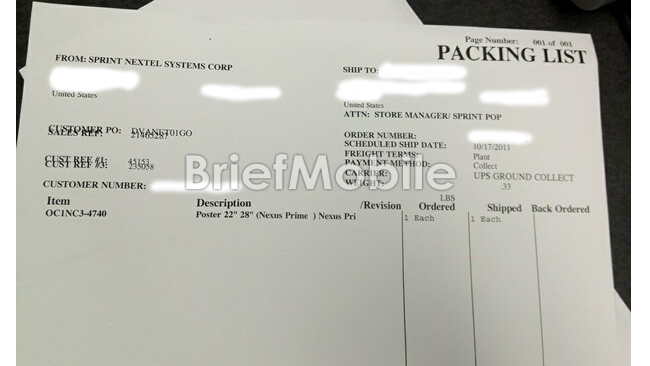 While a UPS shipment order is only for a poster of the handset, we could only imagine that Sprint must be gearing up with Galaxy Nexus marketing materials. With Verizon essentially confirmed and ATT and T-Mobile versions likely on their way, adding Sprint to the carrier lineup is just icing on the cake.

When Samsung launched the Galaxy Nexus sign-up page, it showed seven possible carriers to choose from. This certainly does not mean we are going to see the handset launch on the likes of US Cellular or Cellular South, but more to gauge consumer demand. This is exactly what was said at the announcement. Still, we hope that Samsung and Google had already decided to blanket the US with the Galaxy Nexus and make it available on all four major carriers in the first place.

The Samsung Galaxy Nexus Coming to Verizon this year

Looks like the  Samsung Galaxy Nexus will be making an appearance in a 4G LTE form.

Samsung and Google Unpacked Event in Hong Kong brought the next evolutionary step of Android to the fore. Two key announcments of course came out of the event, the coming of Android 4.0, dubbed Ice Cream Sandwich, and a vessel with which to carry it into the market, the Samsung Galaxy Nexus.

In the US, users of Verizon and their LTE network will be able to pick a compatible version of the new Galaxy Nexus, we are assured, before the end of this year 2011.

Three, O2 and Vodafone to offer Galaxy Nexus in the UK

When Google and Samsung unveiled the new Galaxy Nexus they mentioned this bad boy will be available all around the world. We are happy to inform you that three of the leading British operators announced they will be among the carriers offering the first Android Ice Cream Sandwich-powered smartphone and they are Vodafone, O2 and Three.

But T-Mobile and Orange is not on board yet. No Launch Date Anounced yet from the Three carriers.