Rockstar keeps delivering great news to gamers around the globe today. First it was the new trailer of the upcoming Max Payne 3 and now the game studio confirms that the original Max Payne game will hit iOS and Android devices "very soon".

The news came from a Q&A session hosted on the Rockstar website, where a fan asked whether Max Payne will be ported for mobile devices and Rockstar responded "Yes, it's on its way".

This is not going to be the first time Rockstar launches its older game titles on mobile platforms. In fact it is quite understandable that after the successful release of Grand Theft Auto III, Max Payne is on his way.

NVIDIA announces GTX 690, Most powerful Graphics Card on the Market, yet
Technology 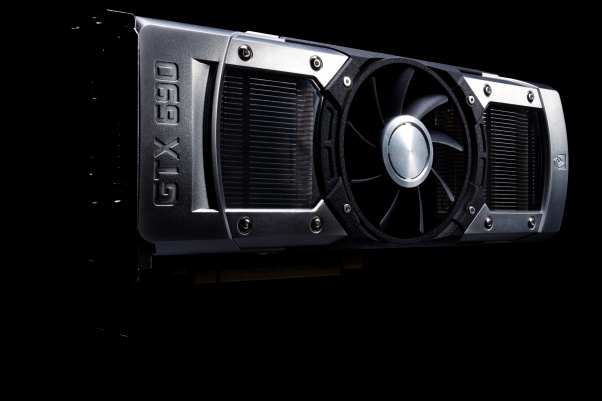 Nvidia announced its newest flagship graphics card at the NVIDIA Gaming Festival 2012 in Shanghai, the GeForce GTX 690. Combining two GTX 680s on a single card, the GTX 690 is the Most powerful Graphic card till date.

Combining two chips on a board is always tricky business and contrary to what one might expect the performance is not exactly double that of a single GPU card. In fact it's usually less than the two cards running in SLi mode. But with the GTX 690, NVIDIA is aiming to get performance that will be equivalent to running two GTX 680 in SLi, while maintaining the convenience and lower cost of having a single card in your system. 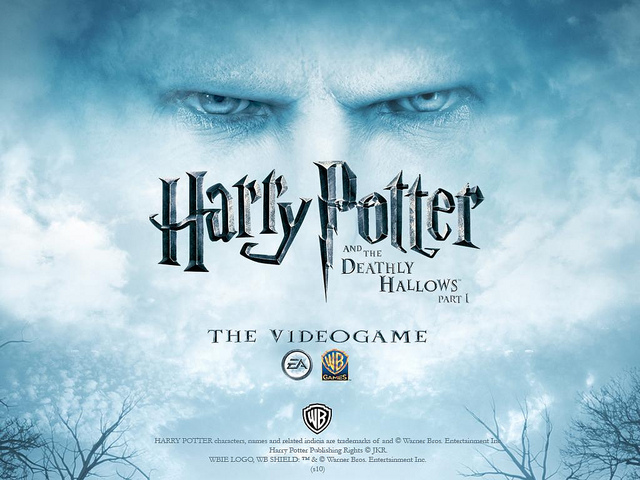 After the release of the last part of the Most popular Movie series of all time Harry Potter and the Deathly Hallows Part 2, The Company that responsible of developing harry potter the game, which is EA (Electronic Arts), is thinking about making an Android version of the game.

Rumor has it that EA wants to get the popular Harry Potter game into the Android world, After many HD games has already hit the platform... EA want to target all harry potter fans through Google Play, It's also likely that an iOS version is Coming too.

Call of Duty: Black Ops 2 to launch on 13, November
PlayStation 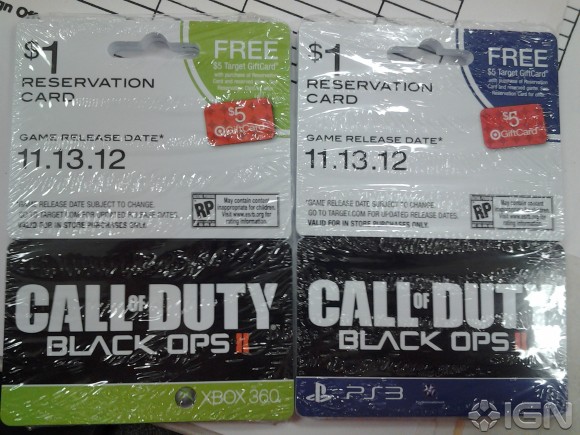 If you are a big fan of Call Of Duty (COD)... we have some good News for you! The next part popular best first-person shooter game "Call of Duty: Black Ops II" has been revealed by game store Target

Target has released a $1 pre-order/reservation card which confirms the release date to be on November 13, 2012. The will hit all popular gaming platforms PlayStation, Xbox and PC by that date. 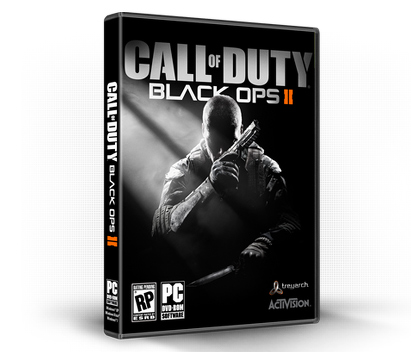 Treyarch has officially announced the next Call of Duty, the "Call of Duty: Black Ops II". The official site for the game went live yesterday on May,1 but today we got the trailer. The Game will be officially released on 13.11.2012 worldwide. 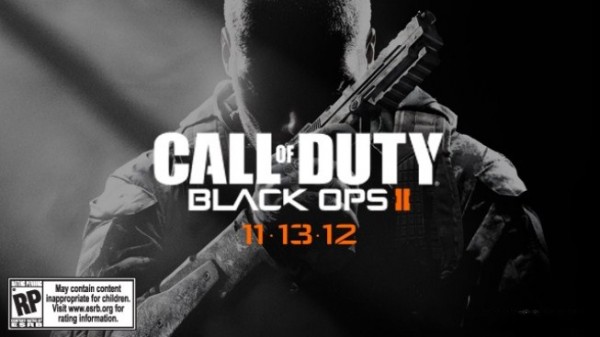 The new game takes place in the year 2025 during the second Cold War. You play as David Mason, the son of Alex Mason from the previous game, although there are flashback portions that take place in 1980 where you will also get to play as Alex Mason. Your main objective in the game will be to hunt down someone called Raul Menendez. Also, interestingly, and spoiler alert if you have not played the previous game, but Frank Woods, who supposedly got blown up in the previous game, is now somehow back in the new one. 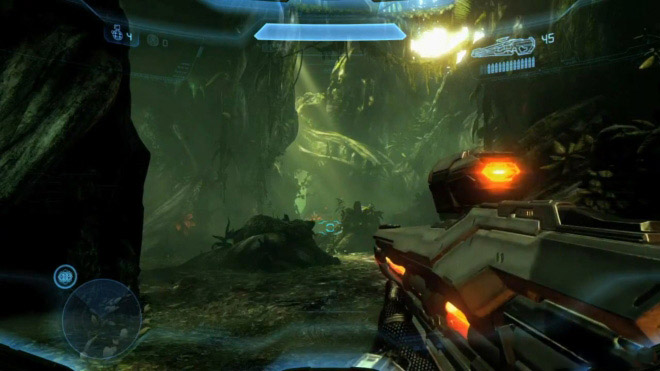 The Microsoft event at E3 2012 has more than just new announcements for the Xbox. It also featured some killer game demos for some of the upcoming games. This includes the likes of Halo 4, Gears of War: Judgement, Tomb Raider Crossroads, Forza Horizon, Resident Evil 6, Splinter Cell Blacklist, Call of Duty: Black Ops 2, Far Cry 3, Fable The Journey and more. All Trailers are below Enjoy!

Mass Effect 3: Extended Cut will be Free to Download in 26,June [Video]
PlayStation

If you are a fan of Mass Effect 3, you probably Angry because of its crappy ending... We Have Good News for you! BioWare has just announced the Extended Cut DLC for Mass Effect 3 will be released on June,26 worldwide for PC and Xbox 360. The PlayStation 3 update will be pushed on 26,June in North America and 4,July for the rest of the world.

The DLC is free, weighs almost 2GB and expands the cinematic sequences at the end of the game. There won't be any changes on the story, just more answers and closure. 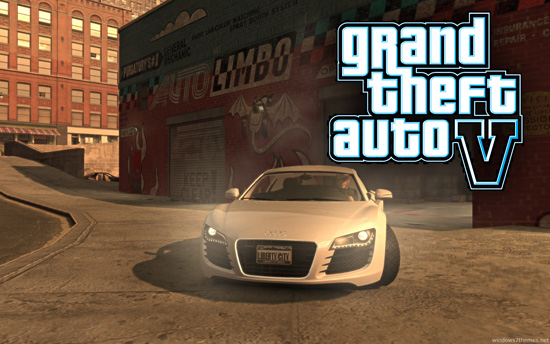 2 New Screenshots for the upcoming Grand Theft Auto V has been revealed today from Rockstar, showing off the game's San Andreas setting. 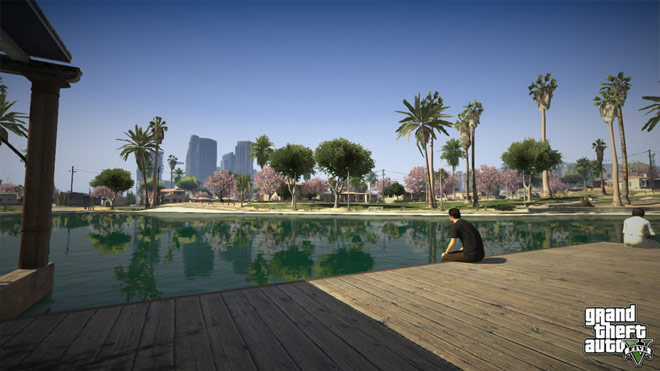 This much anticipating game was first announced last year, followed by a debut trailer which confirmed the game's modern-day setting in San Andreas and the surrounding area. The official Rockstar blog, a Rockstar representative confirmed more details and assets will be available in the near future.

"We are very busy working on the game! Everything is going well, but the game is a huge project. We should have more information and some new assets for you soon." Rockstar 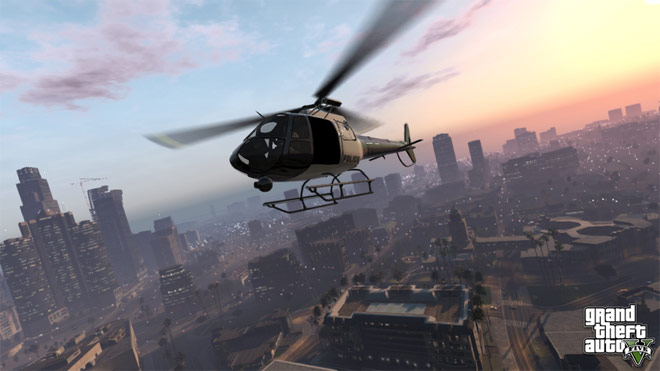 Rockstar also offered an apology for the lack of information regarding the game up until now.

Gameloft has launched a new promo for its games on Android to celebrate Valentine day. Most of the titles from the popular game publisher will be reduced to $0.99 today, which is an incredibly tempting price, considering their quality.

All you need to do to take advantage of the promotion is just visit the Android Market and start downloading.

After Many Games made its was to Android like GTA III and Max Payne, Today, Gameloft announced "N.O.V.A. 3 - Near Orbit Vanguard Alliance" the next installment to the highly popular mobile series game. 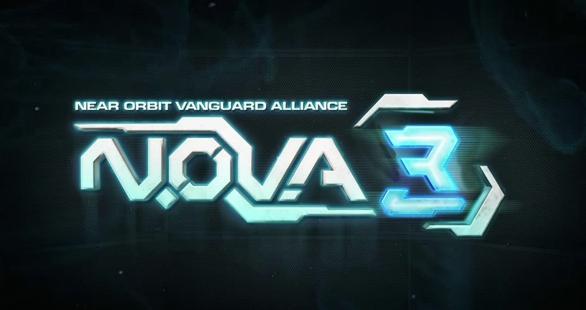 The Game will be released later this year for the two leading smartphone platforms Android and iOS, but unfortunately, we didn't get any more info from Gameloft on the game features or an exact Date/Quarter when the game will be released. The price of the Game is estimated to be $6.99 on google Play Store. Make sure to watch the youtube video below. 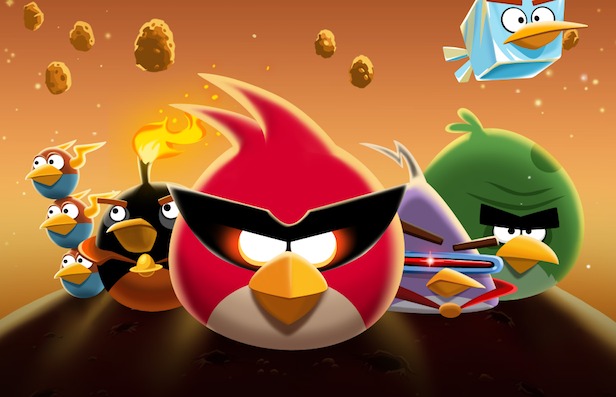 Rovio said on its blog:

"This has been simply amazing, and the whole Rovio team is thrilled to see such a fantastic reception for the game.

We extend our deepest gratitude to all fans of Angry Birds everywhere. While numbers like this certainly say something about the popularity of Angry Birds, for us the main goal is to keep creating fun new experiences that everybody can enjoy!" 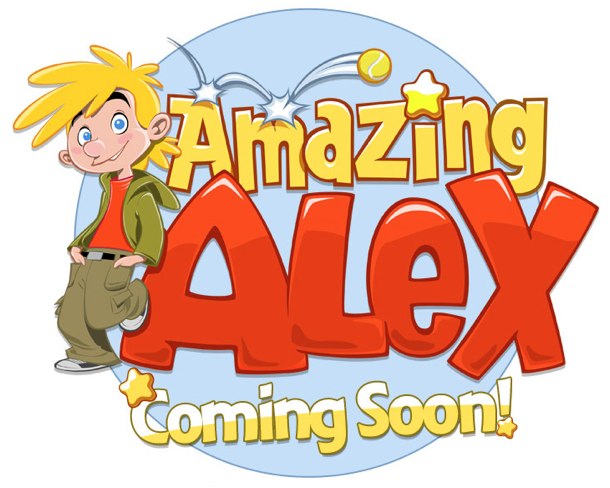 The successor to Rovio's immensely popular Angry Birds franchise will be called "Amazing Alex" and will be based on the iOS game Casey's Contraptions, launching in the next two months.

The company has already registered the domain for the Game amazingalex.com, Here is a photo of the WHOIS record below. 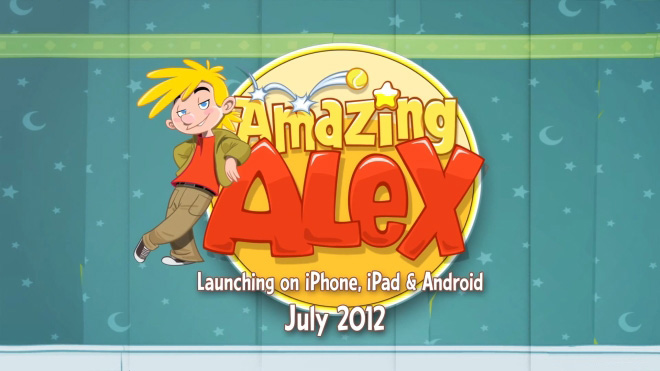 Developer of the obscenely popular Angry Birds series of games Rovio is now set to launch a brand new game for iOS and Android devices. The game is called "Amazing Alex" and is set to launch this month, probably Mid-July.

If you are familiar with Rube Goldberg contraptions you already know how to play this game. The game will require you to setup objects into creating a complication contraption in order to achieve a simple goal. Of course, there is no one way to achieve the goal and you can come up with various ways to achieve the same effect. 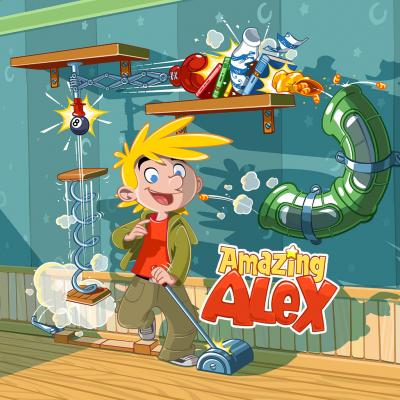 Along with letting you solve puzzles, Amazing Alex will also let you design new levels using 35 objects and then upload them online for everyone else to play.

Rovio's latest Game "Amazing Alex" which launched on iOS and Android devices only. Luckily, we have some good news for you. 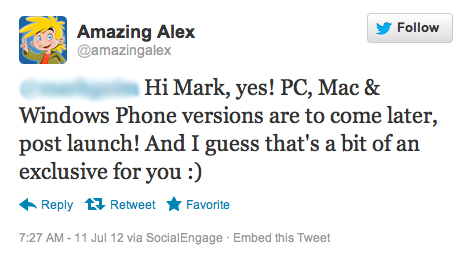 The official Amazing Alex Twitter account let it be known in a tweet that there will in fact be a Windows Phone version of Amazing Alex in the future. Rovio also mentions a PC & Mac versions on the tweet as Coming soon.

If you are searching for the Best Android Racing Game ever... We got one FOR FREE as The App Of The Week, So the very first thing you will notice about Riptide GP is the graphics. They are completely and utterly uncompromising in fluidity, detail and beauty. Colours are clear, vibrant and sharp, bursting from the screen with every turn, jump and stunt. The highlight is the splash effect when your jet ski creates enough of a wave to hit your rear view perspective. This creates lines of water being pushed aside from your screen, much like rain against a car windscreen. 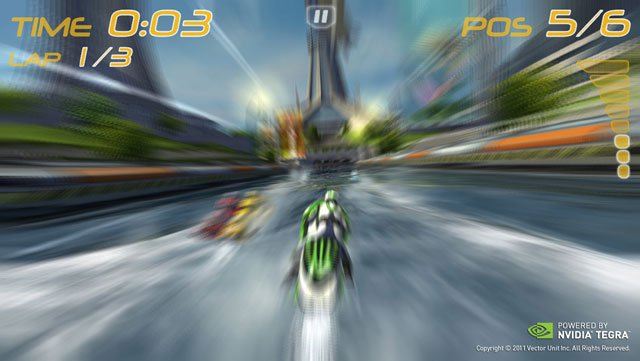 There is also a very neat graphics effect when you hit Boost. This power-up, which you can earn by pulling off stunts, creates a motion-blur effect that propels you extremely fast through the water ideal if you need to catch up with a competitor or extend your lead. But it also looks great, using an almost tunnel vision blurring that scoots you along at top speed.

We offer the Full Version of this game for Free as The App Of The Week, Make sure to watch the Trailer Video below, Download the Game from the Link Below or scan the QR code from your pone to directly install it on your phone. 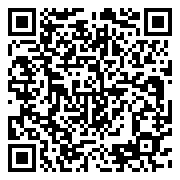 This Week we bring you One of the BEST Third-Person Action Shooting Game "SHADOWGUN" as the FREE App OF The Week. 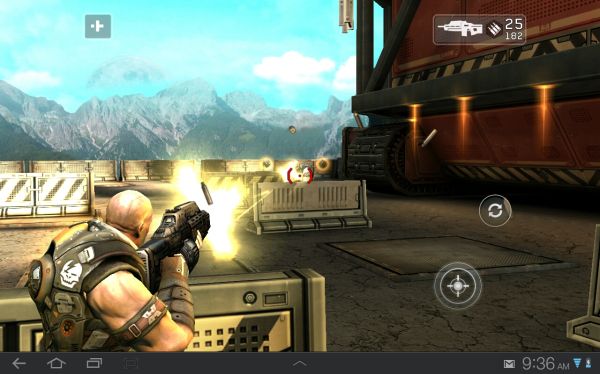 SHADOWGUN puts you into the role of John Slade, the galaxy's most infamous bounty hunter. Your mission: hunt down Dr. Edgar Simon, maniacal genius and leader of his own mutant army. Infiltrate Dr. Simon's mountain fortress and fight his personal guard of cyborgs, battle droids, and genetically-enhanced humanoids. Using state-of-the-art weaponry, ships, and the assistance of S.A.R.A.-Slade's personal android assistant-SHADOWGUN combines intense tactical combat with 3rd person action. You can Download the game from the Link below or by Scanning the QR code with your Phone. 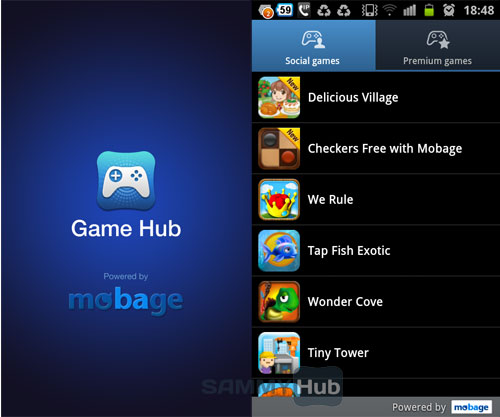