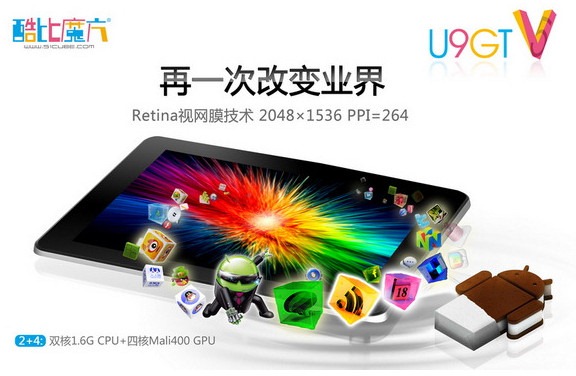 A Chinese manufacturer called "Cube", Made an Android tablet that pack the same "Retina" display as the Apple New iPad (aka iPad 3) with the same resolution 2048 x 1536 too.

The tablet will be called Cube U9GT5, Its display size is said to be 9.7" is size (same as the iPad) and has the same pixel density ~264ppi (pixels per inch). This tablet runs Android 4.1 Jelly Bean and it has a Cortex-A9 Dual-Core CPU and a Mali-400MP Quad-core GPU with 2GB ram that will run Jelly Bean very smooth on this high-resolution screen.

ALL THIS and it will cost you ONLY $200, The Cube will probably be launched in China first at an unspecified date during this year than will be released worldwide. Hands-on Demo Video Below!