Nokia might have been out of the smartphone business for a few years now, but there are still plenty of us who have a soft spot in our hearts for the once great Finnish ruler of the bygone phone world. We cannot help but feel a tinge of nostalgia and quite a bit of excitement each time a rumor or a leak shows us that Nokia is coming back into the business. However, it is almost certain now that Nokia is indeed coming back with a few Android smartphones and tablets in the last quarter of 2016. 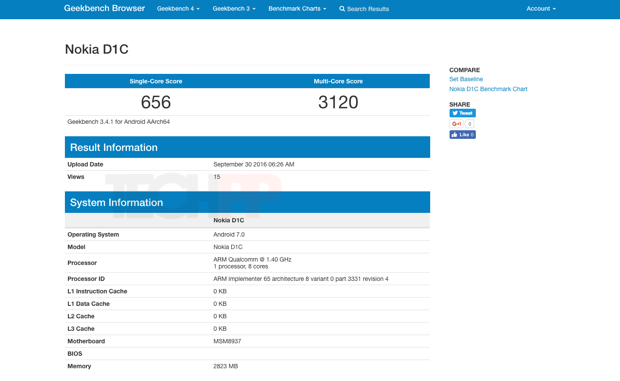 The Nokia branding will be continuing under HMD, which is constituted largely with major ex-Nokia employees. As we have now officially entered the last quarter of the year, a snapshot of the Geekbench test result is showing us the performance of a certain "Nokia D1C." The handset scores decently in all the five trials with its Qualcomm Snapdragon 430 octa-core processor (1.4GHz), Adreno 505 GPU and 3GB of RAM, running on Android Nougat 7.0 apparently. We are sure that there will also be higher-end devices, but for now, the fact that Nokia is making a comeback into the business is quite exciting in itself. We will keep you informed about this as more news pops up.

The Nokia D1C was largely revealed when it first made an appearance onto Geekbench a while ago, and now the smartphone has appeared on AnTuTu. This further confirms that Nokia is coming back to the mobile business, along with revealing that the phone will have a Full High Definition panel. It is always exciting for those that still have a soft corner for the Finnish phone company to get confirmations about Nokia's return. If you do not know much about the D1C already, check out the screenshot and the specifications listed below.

From what we can see here, the D1C is a low-mid range device and definitely not the higher end model that we are still waiting to get a hint of, via leaks. If reports are to be believed, then the company will make its comeback with at least one more smartphone, if not two. We will let you know as soon as more news turns up.