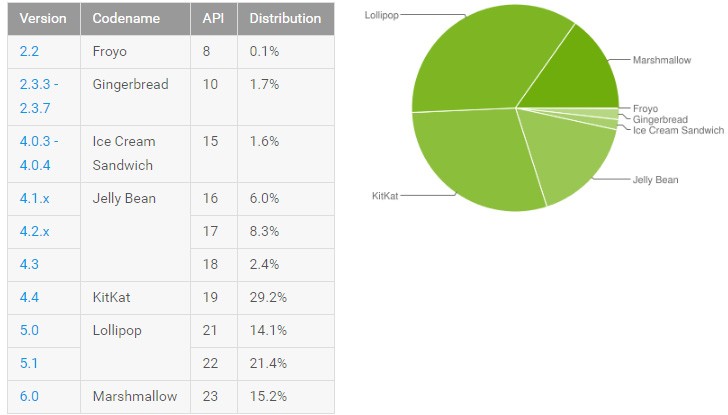 Android Marshmallow just reached 15% recently in terms of the percentage of devices running on the OS and that's good news. Android Lollipop still leads the chart with a whopping 35.5% of all current Android devices (divided in between the two versions) in the market running on it. Even Android 4.4 KitKat is enjoying a huge market share at 29.2%. Android Jelly Bean continues to power 16.6% (all versions from 4.1 to 4.3 included) of the Android devices out there till date, but if you go before that to the likes of Ice Cream Sandwich and Gingerbread, the numbers are quite low at 1.6% and 1.7% respectively. Finally, Android Froyo is the oldest Android version to still be used by some users on their smartphones and the percentage is a negligible 0.1%.

Although Marshmallow is lagging behind, it is definitely gaining in size and it's good to see. However, Android 7 Nougat is almost out and once it is out, it will surely take the crown as the most advanced Android OS with the least number of devices running it, as is the system with Android devices unfortunately. In the API usage situation, the ancient OpenGL 2.0 is at the top of the list with 46% of all Android powered devices running it. OpenGL 3.0 is used by 42.6% of the population, while OpenGL 3.1 is utilized by a disappointing 11.4%. The Vulkan API is the latest and most powerful of the bunch, but it will take some time before enough devices start using it for the API to be even listed.