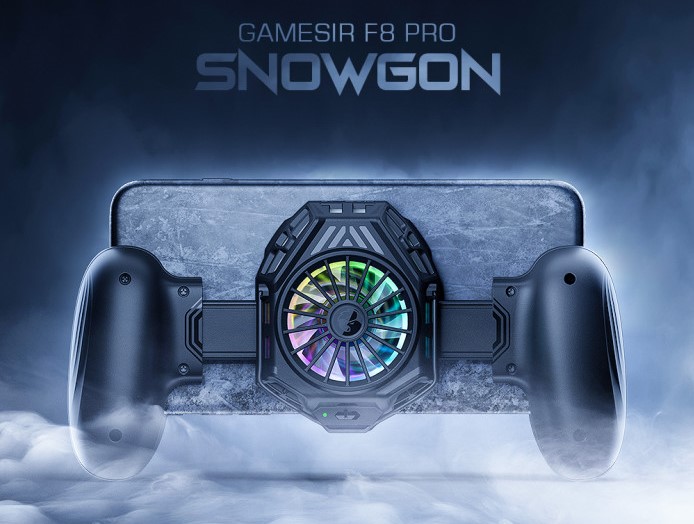 Perhaps the greatest issue when messing around on your smartphone is that your phone tends to get altogether too warm. Except if you own something like the RedMagic 6 or ASUS ROG Phone 5 with its inherent fans, you're somewhat stuck. Without a doubt, you could quit playing for a piece, however That doesn't really sound fun at all.

Today, GameSir has reported another Indiegogo crusade for the GameSir F8 Pro Snowgon. This versatile gaming hold joins to your phone easily however has an underlying cooling framework to hold your phone back from overheating.

Rather than interfacing with your phone through Bluetooth or over USB-C, the Snowgon works with pretty much any smartphone and uses a stick-on joystick to give a portion of the controls that you'll require. Simply utilize the joystick to go around, and the on-screen catches in the game to do all the other things.

In any case, to give you a couple of more FPS while you're playing, and give the strategic advantage, there's RGB lighting incorporated directly into the fan. The solitary catch with this whole outfit is that to utilize the fan, it should be connected. That is somewhat of a bummer on the off chance that you would prefer not to convey a force bank around with you, yet basically it's there in the event that you need it. GameSir additionally worked on the grasp to make the regulator a smidgen more ergonomic than past regulators and phone holds.

Estimating for the Snowgon is relied upon to begin at around $45, however you can either back the Indiegogo lobby and get one for $35, or you can pre-request straightforwardly from GameSir for $40. In any case, you'll save a couple of bucks and the Snowgon is probably going to be delivered at some point in August.