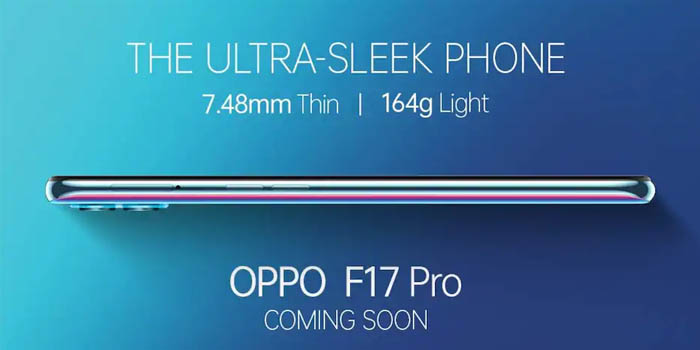 Oppo F17 Pro is on its way in India, according to the company teased through a GIF on Twitter today. The company has called the phone to be the sleekest phone of 2020 with a thickness of 7.48mm. Alongside the announcement made on the micro-social media platform, the company set a news release highlighting the arrival of the F17 Pro in the country. The press release didn't mention any hardware or software features of the phone, though it mentioned that the phone would come with a 22-degree edge design. The news release said, "The ultra-sleek body of the Oppo F17 Pro ensures that it easily slides into the pocket or can be tucked into the bag with ease without causing any bulge".

The phone supports dual-SIM. It features an AMOLED touch screen with 16 million colors, 1080 x 2340 pixels screen resolution. The device has an Android 10 operating system out of the box and is powered by Mali G72 GPU for graphic processing. Oppo F17 Pro features a quad-camera system with a 48-megapixel camera lens, 8-megapixel ultra-wide-angle camera lens, a 2-megapixel macro camera lens, and a 2-megapixel depth sensor. For selfie pictures, you get a 16-megapixel camera lens with f/2.0. The phone is powered by a non-removable li-polymer 4,500mAh battery and has support for Wi-Fi Direct and hotspot technologies. The fingerprint sensor is placed at the bottom of the screen.

The Amazon.in also shows the Oppo F17 Pro from one side. Furthermore, the E-commerce site suggests the existence of the Oppo F17 alongside the F17 Pro as its microsite is title Oppo F17 series. Oppo hasn't revealed the launch date of its new smartphone in the country yet. According to some reports, the phone might be launched in August.