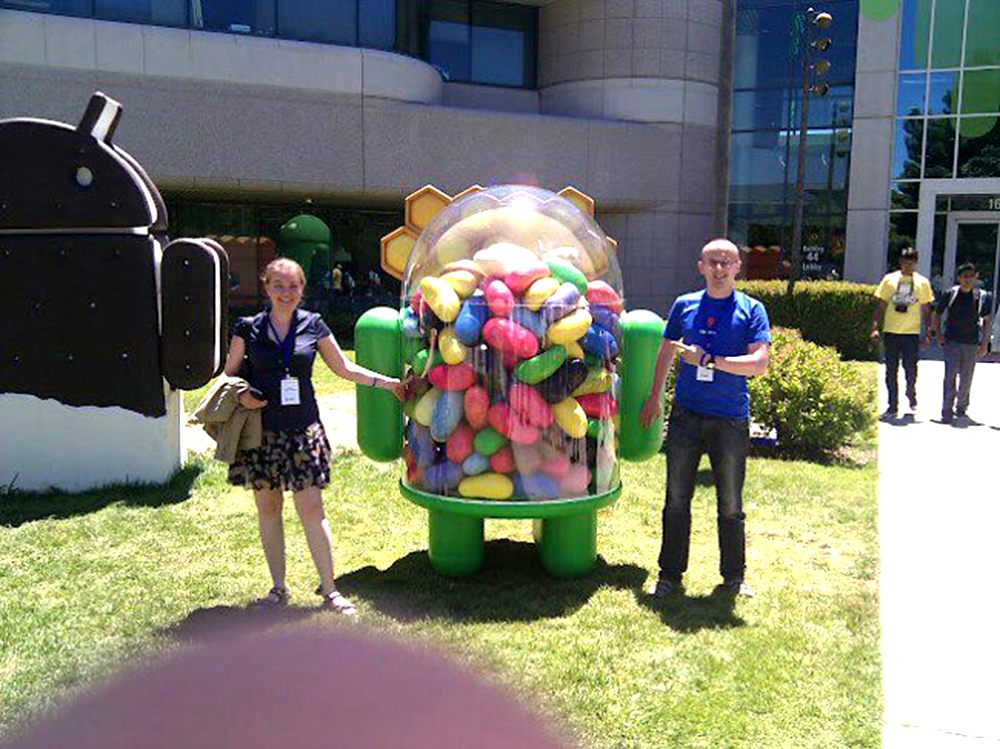 It's CONFIRMED & It's COMING Tomorrow, Yes... Android 4.1 JellyBean will be announced tomorrow on the Google I/O 2012 Keynote.

This has been confirmed by Google and Also there is a new statue was added to the menagerie of confectionery sculptures at Google headquarters in Mountain View, and it was made of "Jellybeans".

Samsung Galaxy Nexus will be the first phone to get Android 4.1 Jellybean

The Google Play Store has updated its listing of the GSM Galaxy Nexus in the devices section, and for a little while checking out it said "The latest smartphone from Google, soon the first phone with Android 4.1 Jell...". That would seem to make it a closed case that we'll be seeing Jellybean introduced next week, and that it will be Android 4.1 JellyBean release, in the same vein as the change between Éclair and Froyo from 2.1 to 2.2., and Froyo and Gingerbread (2.2 to 2.3).

The image in the checkout area has changed too; the phone in the image has a new background and a glassy Google Search widget, which suggests that there is a minor visual refresh coming with Jellybean.

While Jellybean seems to be confirmed, the fact that this is leaking out for the Galaxy Nexus suggests that another rumor may not pan out as expected; 4.1 had been described as a tablet-oriented update, but if the phone UI is getting a visual refresh then it suggests that it may not be a completely trivial update for Android handsets.

Google I/O 2012 Official Application was just been released today as the event will start Next week. However, We Noticed something strange on the App screenshots attached at the Google Play Store App Page.

The Google search bar used on the app is different than the one used on Android 4.0 leading to some speculation that what we see on the app, and in the photo of it, is Jelly Bean, the next Android build starting with Android 4.1. Unlike the transparent search bar seen in Ice Cream Sandwich, the one on the app is opaque.

It could be an early look at Android 4.1 or merely a nice new design for the Google search box. But what better time to start raising the curtain on the next build of Android than during the two days of the year when Google has the the complete attention of developers.