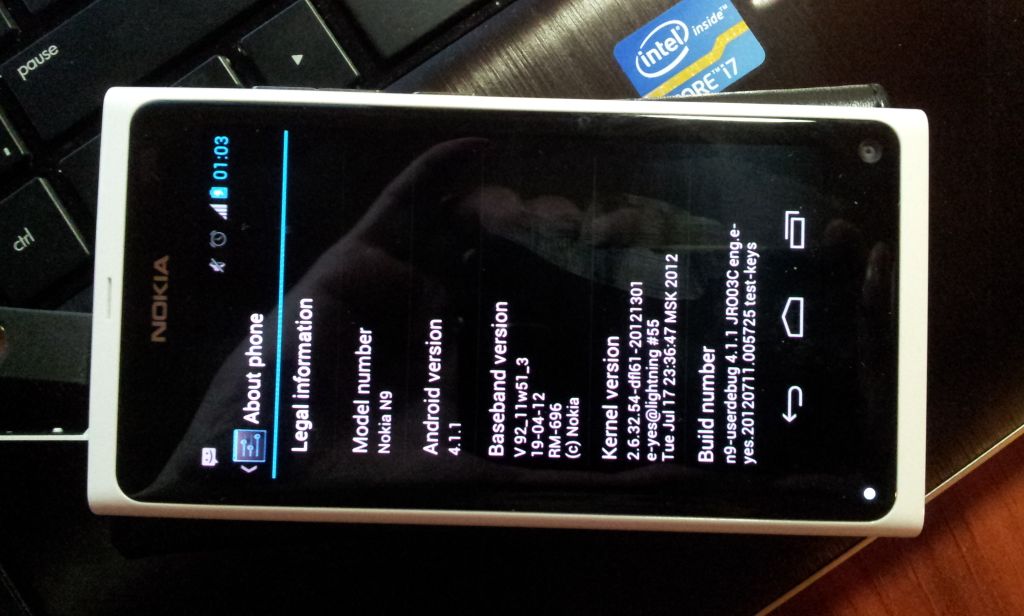 The latest version of Android, Jelly Bean 4.1 has been ported to the Nokia N9. After the company abandon the smartphone and its OS MeeGo, A developer made this port for the N9, The proof has been posted on his Twitter account.

Since the N9 is being slowly forgotten by Nokia, it is now up to the developers' community to keep the thing alive. While official updates are still going on, we all know they won't continue for long, so it's good to see that N9 fans are taking matters into their own hands.

The One & only MeeGo device Nokia made till date, Nokia N9, is not forgotten. The Nokia N9 will get updated to PR1.3 verysoon, a small but valuable update according a Nokia post regards its future plans for the N9.

A representatitve from Nokiaconfirmed that PR1.3 will arrive to the only Nokia MeeGo smartphone by June, and will contain many little fixes, but also some surprises. The update is said to be already undergoing testing a good sign that it will indeed hit the platform on time.

Ice Cream Sandwich 4.0.3 is the latest version of Android that all android smartphones owners are waiting to update their phones to it. Meanwhile, Nokia N9 already got it thanks to "Project Mayhem".

Its not fully complete yet or you can say its an alpha version that only covers the basics of ICS, Screen, rotations sensors, Bluetooth, Wifi, phone. It also has software buttons (on-screen buttons) like the galaxy Nexus. The few hardware buttons that the Nokia N9 has are working too along with the headset buttons.

Unofficial WhatsApp for Nokia N9 and N900 is under development

Maemo and MeeGo users has a great online community and thanks to that community Nokia N9 and the N900 are getting an unofficial version of WhatsApp, even though the official App company behind it has not made an official app for the platform. The app is still a work in progress using WhatsApp APIs, you cannot get it right now but it will available eventually very soon.

The app is based on the Series 40 J2ME app, which helped the project get a Head start. A working beta of the unofficial WhatsApp for N9 and N900 is expected to come out next week.

After one Month of testing by the developers, the MeeGo 1.2 Update goes live for the N9 users. The update size is about 284MB and it may take a while to install too. But it is well worth the wait. With it, you will get to make video calls and finally put that front-facing camera of the Nokia N9 to good use. MeeGo 1.2 also offers folders in the app launcher so you can get the place more organized.

Other improvements include updates to the camera and gallery and copy/paste functionality with brackets.