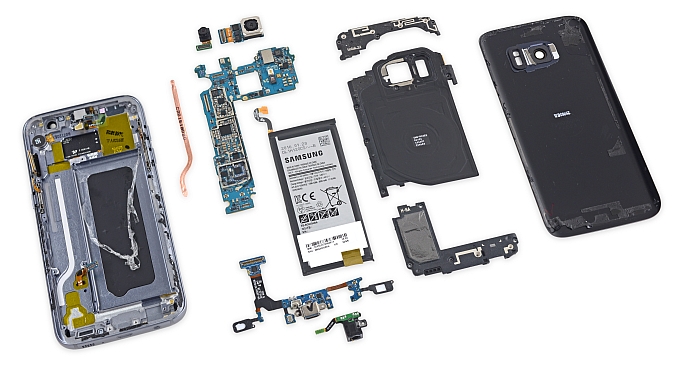 The Samsung Galaxy S7 has already gone through a few teardowns and the latest one is performed by iFixit. In their post teardown analysis, the first thing that they have highlighted is the fact that the S7 is pretty hard to repair. Among other scores by iFixit, the Samsung flagship scored a 3/10 in terms of reparability, which is even lower than what the Galaxy S6 had scored last year.


At first, it seems like the Galaxy S7 does one better than the S6 because this time around, one does not need to take out the motherboard first in order to reach the battery. That impression vanishes soon enough once you realize that the battery has been glued firmly inside. While this will not matter much now, things may not work out well if you want to replace the battery in the future.


iFixit tells us that removing the rear glass panel itself was a challenge to complete without damaging the phone somehow as it too had received the glue treatment quite firmly. If the USB port happens to become defective over time, anyone who will be trying to repair it will face two problems. The first is the fact that the port cannot be removed without taking out the display first, which in itself is quite tricky. Secondly, once the display is removed, the chances of it being internally damaged are high, making the entire affair a risky manoeuvre. Couple all of this with the rubber seals that protect the internals of the Galaxy S7 from liquid damage and you have a phone on your hand that might be very difficult to repair if it ever breaks down.

Apparently, Flip Phones are Still a Thing in China
Samsung