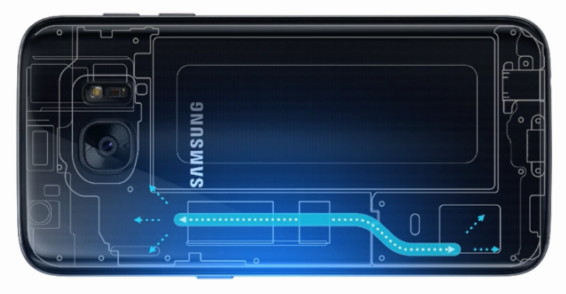 Teardowns of the S7 and S7 Edge had revealed a curious flat piping system around the CPU of the two devices and Samsung has now confirmed it to be a cooling system designed for mobile gamers. This cooling apparatus is actually an incredibly slim thermal spreader that is linked with the Game Launcher apparatus designed to keep the devices cool even during intense 3D gaming for long stretches.

An interview with the engineering team of Samsung smartphones revealed that this little heat pipe is the smallest and thinnest heat spreader made for a smartphone till date. In fact, those little flat pipes might even be the most compact ones available in the market today. The pipe which is 0.4mm in diameter and has a space of 0.2mm inside was designed from scratch as there was nothing readymade in the industry which the engineers could use successfully without tampering with the design of the S7 series. There was experimentation with different metal mesh and alloys by the engineers and as a result, the tiny thermal spreader is fifty-times for conducive to heat, when compared to pure copper!

A very small amount of water inside the flat pipe helps in spreading the heat evenly. As the temperature rises high enough near the processor, the water evaporates and moves to the cooler side where it then condenses back into liquid form. The liquid water travels back near the processor and the cycle continues. This ingenious apparatus is the reason as to why thermal-throttling will never be an issue with the S7 series of smartphones (hopefully).