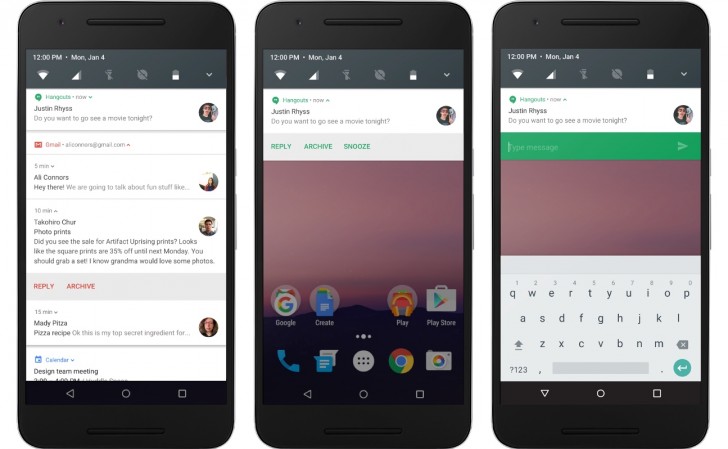 Google released the Android N build all of a sudden last night. For the first time in Google's history developer preview edition has been released this early. The reasoning behind this is to get feedback early and release it to the OEMs in order to the help them build their flavor quickly.

Right now this build is compatible with the Nexus 6, Nexus 5X, Nexus 6P, Nexus Player, Nexus 9, and Pixel C. Given below are some of the salient features:

There will be quick shortcuts once the notifications shade is pulled down. After pulling it down, users will be able to the toggles and see a paginated grid. This essentially means there will be another page for the toggles which are not used often.

One more nice feature is the ability to reply to messages right from the notifications screen. This is something iOS does and it can be very convenient. Implementation of this feature will be the developers call but it is expected that the popular IM apps will take advantage of this new RemoteInput notifications API.

The split-screen multitasking can be used by pressing the overview button and dragging one of the windows to the top of the display to attach it there. Then another app can be selected in work in the rest of the screen. Another way to do this is to swipe up from the overview key to select the app to work on the half the screen and select another app for the rest.

Doze mode can now put hold on the background activities when the display is switched off, irrespective of whether the device is active or not. Added advantage is that there will be saving of battery charge. Now Project Svelte is in a better state and minimizes background activity by getting rid of the three default broadcasts.

The settings app will show the description of the items and there will be introduction a new option for data saving. The improved night mode will make the screen warmer for better readability.