Take a Look at these Leaked Galaxy Note 8 Specs

Take a Look at these Leaked Galaxy Note 8 Specs 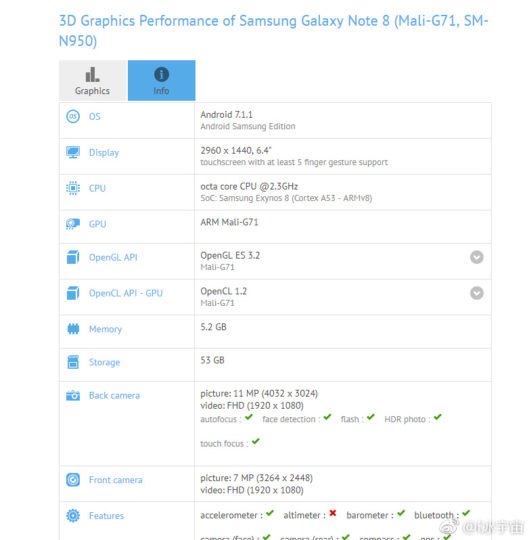 We know the specifications which the Galaxy Note 8 will be sporting this year, or at least most of it anyway. Nevertheless, until and unless we see it all officially on August 23, everything is still just rumors and leaks. Today's leak is brought to us by GFXBench after the Note 8 went on the website for a spin. Check them out in the screenshot above.

The 6GB of RAM, Exynos 8895 SoC, Mali-G71 GPU, 64GB internal storage, dual rear cameras, etc. sits in perfectly with what we had heard and seen so far. However, it was surprising to see that the Note 8 will be sporting a 6.4-inch Super AMOLED QHD+ display instead of the rumored 6.3-inch one. The difference is almost negligible, but it's worth noting nonetheless.

Rumor has it that a new version of the Gear Fit Pro (2) will also be revealed at the NYC exclusive event on the 23rd, but not much else is known about it, including the likely price of the fitness band. On the other hand, a lot of people are waiting impatiently to see how high Samsung prices the Galaxy Note 8, which is expected to be as high as $1200 or more.