We had high expectations for HTC first dual-core smartphone, and the company delivered with the HTCSensation. A mixture of evolution and revolution, the family resemblance is clear: a 4.3-inch display like the Desire HD, only now running at qHD 960 x 540 resolution; a Snapdragon processor like the Desire S, only now Qualcomm new 1.2GHz dual-core MSM8260 processor; and HTC Sense, only v3.0 with a new intelligent lock-screen and HTC Watch for video rentals and downloads. All in all, the HTC Sensation is shaping up to be one of the smartphones to beat in 2011; check out our full unboxing and first-impressions after the cut.

In the box there is the usual sparse selection of accessories: a USB AC adapter, USB to microUSB cable and a wired stereo headset with in-line controls. We would like to have seen the MHL-to-HDMI adapter bundled too, like ATT sensibly did with the Infuse 4G, but thats still an optional accessory; you do get DLNA streaming support over WiFi b/g/n, though. HTC will offer a charging dock you can set the Sensation to automatically boot into Dock Mode, with weather and Facebook updates shown, and even optionally turn on the Mobile Hotspot functionality though right now its not on sale.

Construction is solid, with a sheet of toughened glass up front that rises to a slight lip at the edges of the screen. That serves double purpose: keeping the display raised slightly off the table when placed face-down, and also giving some tactile feedback as to when your thumb is swiping toward the very edge. Responsiveness is good, and the whole thing is creak-free. Unlike the somewhat fiddly slide-off doors of recent HTC devices the Flyer was a particular chore to open up the Sensation pulls out of its rear chassis entirely, revealing the microSD slot and SIM slot.

Android and Sense moves swiftly on the dual-core chip; the jerkiness we spotted when pulling shortcut buttons down to the launcher ring on the Flyer lock screen is non-existent on the Sensation. The 3D animations on the homescreen are smooth and menus open without delay. Similarly, the browser renders even heavy pages quickly, and thanks to the qHD resolution you can read, say, SlashGear homepage articles without having to zoom in from the full page width view. Just to whet your appetite, we ran benchmarking tool Quadrant Advanced and the Sensation scored 2245 overall, with 5918 in the CPU category.

We will be putting the HTC Sensation through its paces over the next few days in time for the full SlashGear review, but for now lets just say this: the Samsung Galaxy S II has got some serious competition.

The Samsung I9300 Galaxy S III brings all the latest technology in the mobile world to you in ONE Sleek device. With a Quad-core CPU and an HD Screen, Here is a Full Review of all you Need to know about the Galaxy S III with Exclusive Hands-on Photos, Screenshots & Videos brought to you by YouMobile & Samsung.

The Galaxy S III is currently the Most Powerful Smartphone on the Market today, packing a Quad-core ARM Cortex-A9 1.4 GHz Exynos processor and a Gorgeous HD Super AMOLED Display and a lot more... Check the link below for Detailed Specifications, Prices & Release date for every region. 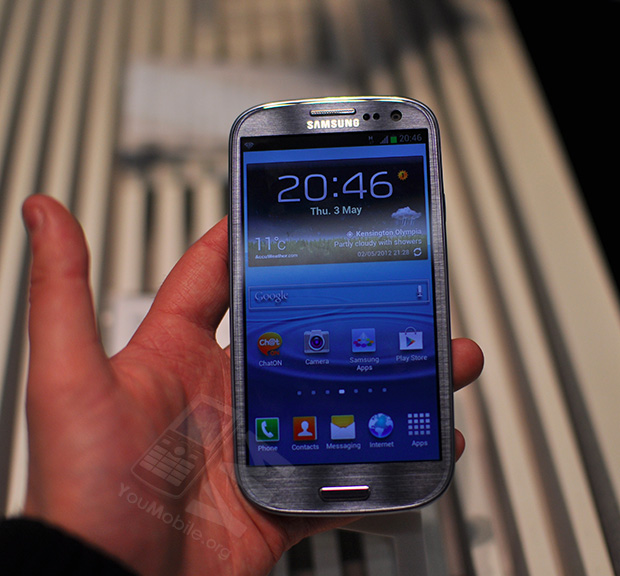 The design of the Samsung I9300 Galaxy S III is one of the most controversial bits about the new Samsung flagship. Built entirely out of glossy plastic, the Galaxy S III takes after the Nexus lineup design lines, If it's Blue or White that Galaxy S III is shining. 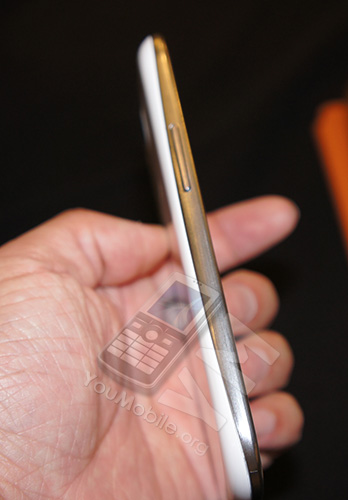 The glossy material is a questionable choice as it really lacks the high-end vibe that a smartphone such as the Galaxy S III should pack, But the good news is that the Samsung "Hyperglaze" coating partially makes up for that, improving both the feel and the handling of the device. 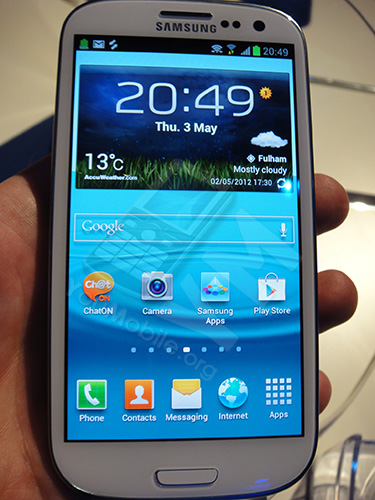 The 4.8" Super AMOLED of HD resolution at the front is where the Samsung I9300 Galaxy S III magic happens. The screen image quality is every bit as impressive as its specs suggest tack sharp and with perfectly deep blacks, it's arguably the best you can find on the market.

The colors are nicely saturated by default, but the display settings menu offers you a choice between four different modes, so you can opt for more natural colors as well. We did prefer the livelier dynamic and standard modes, but the natural and movie modes will probably have their fans too. What's important here is that the S III display offers you flexibility that no other screen on the market can give you. We got a Hands-on Vidoe that show you the Display of the Galaxy S III and its colors, click on the photo below to watch it. 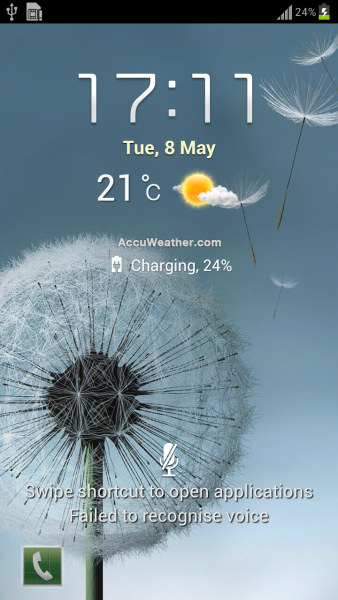 The Samsung Galaxy S III runs on the latest Android Ice Cream Sandwich version which is 4.0.4, but it has been heavily modified by the latest TouchWiz 5.0 UI from Samsung. 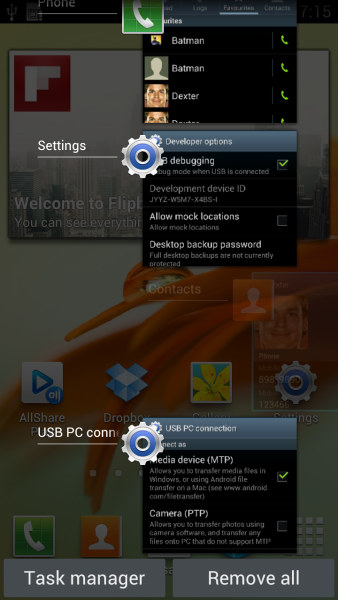 The New TouchWiz is pretty similar to the one on the Galaxy S II but with some New tweaks and features. Some of these features like "Motion Control" that allows you to control your phone with some hands-Gestures

Also it packs an "Eye-tracking" technology that track your eyes movements while using the phone so when you move your eyes away of the serene it goes automatically off. and when you look at the screen again it turn the screen on again. We got an Exclsuive Hands-on video to show you the UI of the Galaxy S III click on the photo below to watch it. 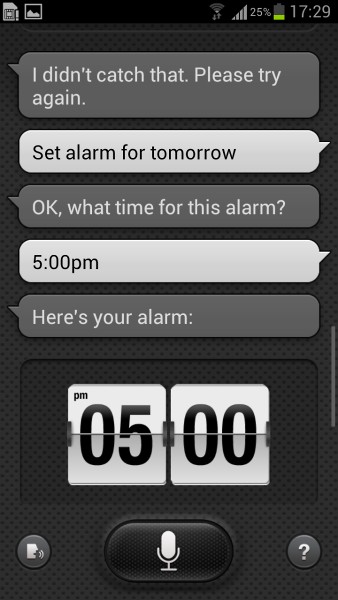 The Galaxy S III is the second smartphone in the Galaxy series to do voice commands. Samsung have implemented a more direct competitor to the iPhone's Siri. You can tell the S Voice to accept/reject calls, take pictures, set alarms and search the internet among others.

The Galaxy S III allows you to share all sorts of media via NFC by simply touching the devices back-to-back. Sadly, you'd need two Samsung I9300 units to make this work as there are no other S Beam-enabled smartphones on the market just yet. 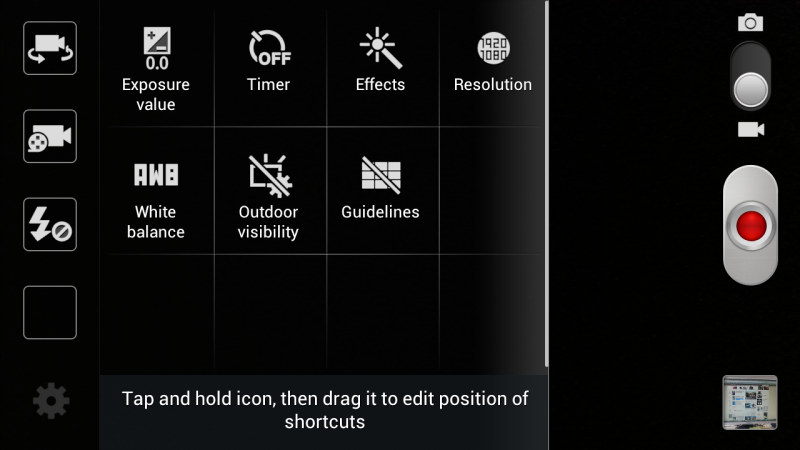 The Samsung Galaxy S III offers the same camera in terms of pixels but actually improves on the performance. It can capture stills with resolution up to 3264 x 2448 pixels and 1.9 MP ones with the front-facing cam.

The camera app interface is quite similar to the one on the Galaxy S II. You get two shortcut bars on each side of the viewfinder on the right you get the still camera / camcorder switch, virtual shutter key and the gallery shortcut. We have an Exclusive Hands-on Galaxy S III video that focus on the Camera Features, click on the photo below to watch it.

The Samsung Galaxy S III relies on a Mali-400MP for Graphics & games, Powered by a 1.4Ghz Quad-Core Exynos 4 chip that boost the phone performance and save its battery as well. The More cores you have in your phone... The More it take less power that's the power of Samsung Exyos architecture.

Dropbox is an online file storage service that automatically syncs files between all your computers and devices. You are given 2GB of free storage, and can pay monthly for more. On the desktop versions you interact with Dropbox through a folder, within which every single file is backed up and synced. This syncing happens in the background and is nearly instantaneous.

The latest 2.0 update has drastically improved and overhauled the Dropbox app, so lets look a little closer at these newer features. Also Dropbox Now Optimized for Android Ice cream sandwhich 4.0 and the Galaxy Nexus.

The new multi uploading ability has proven to be a real time saver for me. This ability to upload numerous files at once really pushes the power of Dropbox on your phone, allowing for easier backing up of important files.

However, when using this to sync all 400 photos taken on my phone I realised that a "select all" feature was desperately needed! Each file must be selected individually; this is fine when dealing with a few files, but as the number of files increases this gets a lot more tiresome. But perhaps this was intentionally left out, in case some people tried to upload 400 photos at once.

Before, navigating to a file through the app involved a lot of browsing through directories to get to the right location. Now, if you know you will need a file again soon, or use it frequently, you are able to "favorite" it. This places a shortcut to the file in a easily accessible section of the app, as shown in the screenshots below:

Favorites allows for quick access to those important files

It is a real pity that this aspect is so underdeveloped, as it would really add to the uses of Dropbox: it could function as a streaming media player, on top of everything else. Even just allowing these files to open with the phone’s default app would be an amazing improvement, in my opinion.

The UI of the app got a total makeover. It now looks a lot cleaner, with file access made much easier, and the number of steps required to upload files greatly reduced.