Xiaomi has officially announced that the company will launch the world's first 108MP with five cameras at the rear side. One of those cameras will be a periscope lens capable of 5x optical zoom, 10x hybrid zoom, and 50x digital zoom. The company has also released a video teasing the phone's zooming capabilities in action. It shows Mi Note 10 mounted on a tripod on one side of the road while on the other side of the road, 5 meters away, is an eye chart.

Xiamoi Mi Note 10 features a glossy finish with jade green color. It will feature the world's first fice camera system. The main sensor sport a 108MP Samsung ISOcELL bright HMX sensor. There will be also a 20Mp ultra-wide-angle, a 12MP portrait camera, and 1.5cm camera for macro-level photography. According to the leaked images, it shows a curved display, a waterdrop notch, and a hint at a tall aspect ratio. For the front camera, it uses a 32MP camera lens.

The device is powered by Qualcomm Snapdragon 730G chipset, paired with 6GB RAM. The device has a large 6.47-inch screen and powered by 5170mAh battery. The company also teased its first smartwatch which is due to be launched on November 5 in an event. The launching event may also have Mi TV 5 series. The watch looks similar to Apple's watch from the design perspective. But we don't know the other features yet. Redmi is doing great with a growing number of units being sold. According to sources, Redmi has already sold around 200 million Note series devices. Redmi Note 10 series is the next smartphone due to release in India and just before the launching date, the Global VP of Xiaomi, Manu Kumar Jain has posted a tweet teasing the launch of the Redmi Note 10 in India. The tweet was retweeted and shared by employees and fans of Redmi Note series.

Every video of them includes a #SM10thChallenge. In the video, he says that the company will be making an announcement on Feb 10 at 10:00 IST. He tweeted, "Got the moves to be as smooth as the smoothest @RedmiIndia smartphone yet? The biggest Not-fication of the year is almost there! Unlock it with Me!, Upload your dance move with the #SM10TH challenge. 10 fans to win BIG!". We don't know what they have decided, but in the company's own words, the price will be BIG.

Redmi Note 9 series was launched back in March 2020, that features a 60Hz LCD. Although a high refresh rate wasn't a trend earlier last year, the realme 6 pro came with 90Hz panels. Still, Xiaomi managed to sell a good amount of Note 9 series in the region. We don't know if the Note 10 series devices would have LCD or AMOLED display, but it is likely that it would come with 90Hz or 120Hz to compete with the latest smartphones.

As per news and leaks, there will be two devices inside the Note 10 series - Redmi Note 10 vanilla model and Note 10 Pro. The former will be available in white, green, or grey colors, while the latter will be available in bronze, blue, and grey variants. As for specs, nothing is final unless we have any words from the official sources or we have the phone in our hands. The devices have already received India's BIS certification. The Note 10 will feature 4/6GB RAM while the Note 10 Pro will feature 6/8GB RAM with 64GB and 128GB internal storage.

There were already some leaks about the next S-series phone from Vivo which was expected to be called Vivo S5. Today, the Chinese company has officially teased the arrival of Vivo S5 by releasing a teaser video and a poster. Based on the recent leaks and teaser it is safe to say that it could be the first phone to feature a diamond-shaped quad-camera system. The teasers reveal that like the Vivo S1 and Vivo S1 Pro smartphones, the upcoming Vivo S5 will be arriving in vibrant colors. This could mean that the phone manufacturer is targeting the younger consumer in China for Vivo S5.

Not so long, Vivo S-lineup brand ambassador Cai Xukun was spotted holding the upcoming S-series smartphone in a promo video for a fashion magazine. The rear side of the phone has pinkish appearance towards the left and right while the center portion looks bluish. The video revealed that the Vivo S5 has a 3.5mm audio jack on its top edge and it has a diamond-shaped quad-camera setup on its back. It appears that the phone is equipped with an in-screen fingerprint reader.

At present, there is no information on the specifications of the Vivo S5 smartphone. It could be packed with mid-range phones. Probably, the company will be unleashing the Vivo S5 in November. Hopefully, its entire specifications will be revealed through its TENAA certification in the coming days. The smartphone is expected to be powered by the Exynos 980 chipset. The said SoC is equipped with a 5G modem that will bring about NSA and SA networks. The launch event for the phone could be held on Nov. 7 in China.

Vivo officially teased its upcoming smartphone with 5G network support in a video. This will be called the Vivo x30. The device is teased to be released in December and is now confirming some of its specs though various video teasers. The smartphone is expected to be powered by the latest processing chip by Samsung - Exynos 980 5G chipset. Vivo's big phone seems to have a long-range zoom camera. The company released two official teasers of the phone. A still in the video teases a focal range of 16mm to 135mm, as well as a variable aperture range of f/1.8 to f/3.0. The variable aperture values belong to the zoom lens. Vivo called the lens "super-telephoto" and the second teaser for the phone confirms its 60x zoom capabilities.

The video is in the Chinese language. It says, "Zoom in, then zoom in again. 60x super zoom, more than you can see". This would be a periscope-style camera that Huawei P30 Pro and Oppo Reno 10x zoom edition have already used. We don't know how the camera will be different from Huawei and Oppo but so far, this will be the highest zoom capabilities we have seen on a phone so far. The P30 Pro offers 50x digital zoom, while the Oppo Reno 10x goes up to 60x digital zoom. There is no official word on the optical or hybrid zoom values of the Vivo X30 yet, but it is likely 60x digital zoom as well.

The video shows a glimpse of the back of the phone that shows a stacked triple camera array and a separate rectangular camera, possibly the zoom camera on the side. The smartphone was previously tipped to sport a 64MP + 8MP + 13MP + 2MP quad camera setup. There's a Pro version also expected, with a 60MP + 13MP + 13MP +12MP configuration. Other noteworthy specs expected from Vivo's X30 series phones include 90Hz display, 44W flash charge, and a 32MP selfie shooter. 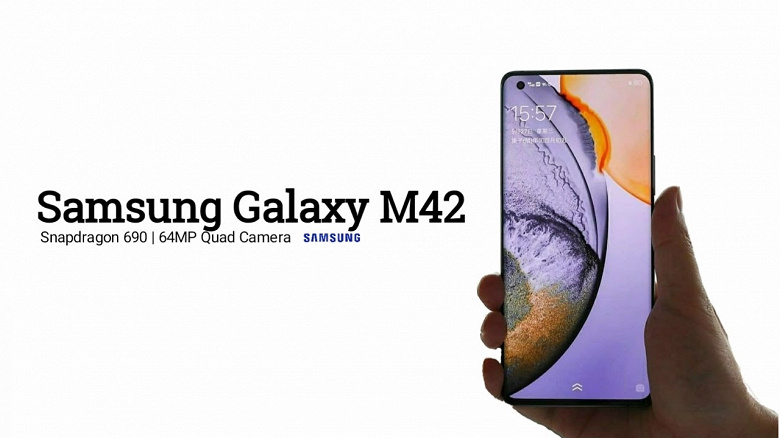 After releasing the Galaxy F02s, Galaxy F12, and the Galaxy M12 in Indian market, Samsung is all set to launch one more elegant yet mid-range smartphone called Galaxy M42 for its budget-friendly fan base. M42 will be equipped with a powerful processor that comes with 5G network capability and would be the first phone to offer 5G in the M series.

The phone has already received a number of official certifications over the past few weeks, that hint an approaching launching date. Now the company has finally started teasing the device, and another few reports surfaced along the teaser about its expected price.The Galaxy M42's teaser video has been shared on Twitter by more than one YouTuber recently. The teaser clearly highlights hashtag #FastestMonster and #5G connectivity to show its main selling features. The tweets also contain the #GalaxyM42 hashtag.

The Galaxy M42 is assumed to be the rebranded version of Galaxy A42 specifically for the Indian market. Both phones might also share some similar features in terms of design, display, and connectivity. However, the major difference lies in the power area. The Galaxy M42 is expected to have a larger battery capacity when compared to the Galaxy A series. The leaks suggest somewhere around 5,000mAh or greater battery for M series.

It is reported that the company will allow the Galaxy M42 to be sold anywhere between $265 to $330. The phone is expected to have a large 6.6-inch super AMOLED display similar to what is available with Galaxy A42 5G. However, you might get a higher refresh rate panel with the device, as having a high refresh rate panel is getting a norm these days.

The phone could feature at least a 20MP selfie camera with a quad-camera system on the rear side consisting of a 48MP primary camera sensor. The phone is powered by the Snapdragon 750G processor, and available in 6GB/8GB RAM and 128GB internal storage configuration. The storage can be further extended using the microSD card. The phone will debut with Android 11 based One UI 3.1 out of the box.