The Samsung Galaxy S8 and S8+ don't have much competition right now as they are the only two handsets right now with the latest Qualcomm (or Exynos) Snapdragon flagship chip inside. The LG G6 is probably its closest competitor yet, but the last-gen SD 821 chip makes the LG handset fall behind. However, that scene is about to change very soon as Xiaomi gets ready to launch their own flagship handsets next week in China, with the SD 835 inside. Rumors have been predicting the specs for the Chinese handset for a long time now, but some of it has just been confirmed by a leaked GeekBench test run result. Check the screenshot below and the specs over here to get a feel of things.

Unfortunately, there's currently no news regarding when Xiaomi is going to launch the mi 6 and the Mi 6 Plus outside China. Going by its track record though, it might be a few months before that happens. Nevertheless, what we have seen so far both in terms of specs and leaked pictures, do look very impressive. Hopefully, Xiaomi will be able to bring the two handsets in other countries myuch faster this time around.

GeekBench Benchmarking Results Out for the Galaxy S8
Samsung

Benchmark results may not always represent real world performance of a particular chip, but they are almost certainly the most popular competitive platforms for smartphone enthusiasts to test out which phone is in which position in the hierarchy. As things have turned out, we now have test results from a GeekBench run of the Galaxy S8. Before you start wondering about which version was tested, let us assure you that both versions were part of the run!

The Exynos 8895 is at the top with a single-core score of 1,978 and a multi-core score of 6,375. The Samsung chip has once again beaten the Qualcomm flagship chip of 2017, the Snapdragon 835. The SD 835 within the S8+, managed to score 1,929 and 6,084 on single-core and multi-core tests respectively. As you can see, both scores were marginally but prominently lower than the ones scored by the Exynos 8895. The Kirin 960 is also in the second place as it loses out to the SD 835 on the single core with a score of 1898, but beats the Qualcomm SoC in the multi-core test with a score of 6,112. Check the screenshot from reddit for more details. 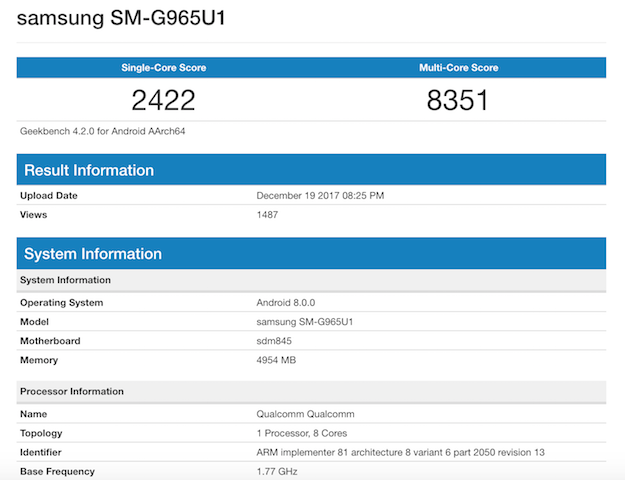 Geekbench Benchmarking Battle in between the iPhone X, the Galaxy 8 and the Note 8
Apple

In a somewhat dismal presentation where certain features of the iPhone X failed on camera, Apple finally revealed the much awaited iPhone X to the world on September 12. While the iPhone 8 and iPhone 8 Plus were also launched on the same day, it would be cruel but safe to say that nobody really cares about them that much in light of the iPhone X. While the new poster boy for Apple is full of controversial and downright bizarre design choices, there is no doubt that when it comes to raw power, it's a beast and now we will take a look at the Geekbench scores revealed to us by ValueWalk to see just how powerful it really is in comparison to the Galaxy S8 and the Galaxy Note 8.

As you can see from the screenshot above, the iPhone X absolutely mops the floor with the S8 and the Note 8 in both single core and multi-core performance. Granted that the real world difference in performance will hardly be noticeable by users, it doesn't take away from the fact that the A11 chip is way ahead of anything that Samsung, Qualcomm or any other Android chip manufacturer might have up their sleeves anytime soon!