Samsung has already replaced most of the hazardous Galaxy Note 7 smartphones in the US and has even restarted selling the phone with a guarantee for safety. However, things just took a turn for the worst yesterday when a Galaxy Note 7 caught fire within a Southwest Airlines plane (994) that was heading to Baltimore from Louisville.

Brian Green stated that the phone was turned off and in his pocket when he noticed smoke coming from it. He threw it onto the floor, where it then proceeded to burn the carpeting and even scorched the metal floor beneath it. In Green's own words, a "thick grey-green angry smoke" was emitting from the smartphone. The plane was evacuated immediately after.

The box as shown by the owner clearly indicates that the device was supposed to be safe due to the black square icon that you can see right beside the model number (SM-N930A). He further added that it even had the green battery icon used by Samsung to assure safety of the device. The phone was at about 80-percent charge when this incident occurred and according to Mr. Greene, he had used a wireless charger to charge it previously.

The burned Note 7 is being investigated by the Louisville Fire Department (arson division), while the CPSC has already started an investigation on the incident. Considering that even checking the device's IMEI number with the recall eligibility checker app confirms that this was indeed a "safe" unit, things are looking VERY bad for Samsung right now. On being questioned by The Verge, Samsung had this to say;

"Until we are able to retrieve the device, we cannot confirm that this incident involves the new Note7. We are working with the authorities and Southwest now to recover the device and confirm the cause. Once we have examined the device we will have more information to share."

The curse of the 7: An iPhone 7 catches fire
Apple 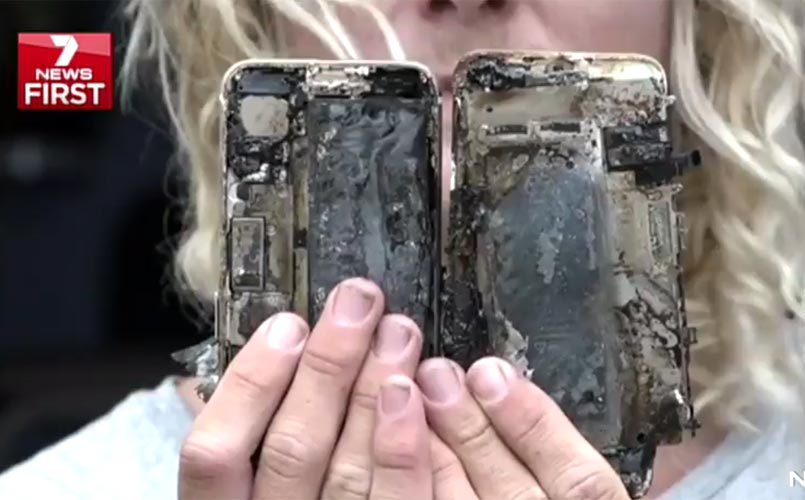