CES is always a great event to welcome the New Year and year 2020 wasn't different. There wasn't many smartphones at the event, but a handful products surely made a splash due to being innovative and technologically advanced. Here are some of the top devices that deserve a mention.

The Lenovo ThinkPad X1 fold is a foldable version of the laptop. It is really cool to experience a laptop that looks like a tablet or monitor when laid out flat and becomes a regular laptop when half-open. The folded version is only 13-inch device that is small enough to carry inside a jacket. It has an ultra-think Bluetooth keyboard that slots in between the screen when folded eliminating the gap inside.

This is not just a regular wide-angle 4k action camera, but has modular structure that lets you switch out the lenses. It allows users to switch out not only the lenses, but the sensors as well. This is a huge breakthrough in cam industry. Rather than just popping a different lens on a stock body, each lens module comes with its own sensor, meaning you always have the right sensor for the lens you're using.

The Chromebook surely steels the show at CES 2020. It is a powerful chromebook with a beautiful design and body. It includes a stylus, that uses a convertible design and the metal chassis is sleek and well-made. If you have been looking for a chrome book this year, you should pay attention to this one.

OnePlus appeared at CES event for the first time, and it truly made an entrance with the concept one. The device has a design nothing like before. The device is ostensibly a OnePlus 7T Pro 5G McLaren edition with a new exterior. The Concept One uses electro chromic glass over the cameras on the rear side which allows them to disappear when not needed. No one has used the elctrochromic glass on mobile devices before and certainly would be a game changer.

There were many TVs at CES but the Skyworth Q91 is one of the biggest and cheapest TV. A 75-inch 8K IPS LED TV from a storied television maker for under six thousand U.S. dollars is worth paying attention to. The Tv has integrated 8K AI image processing Engine, Dolby Atmos 2.1.2, a soundbar with Wonder Audio Sky Echo, a camera for web-conferencing, and SwAIoT for connecting all your smart home products to your TV, no matter if they're Skyworth products or powered by Google Assistant or Amazon Alexa.

What Android Products you can buy with the Price of iPhone 6 ? [Photo]
Technology 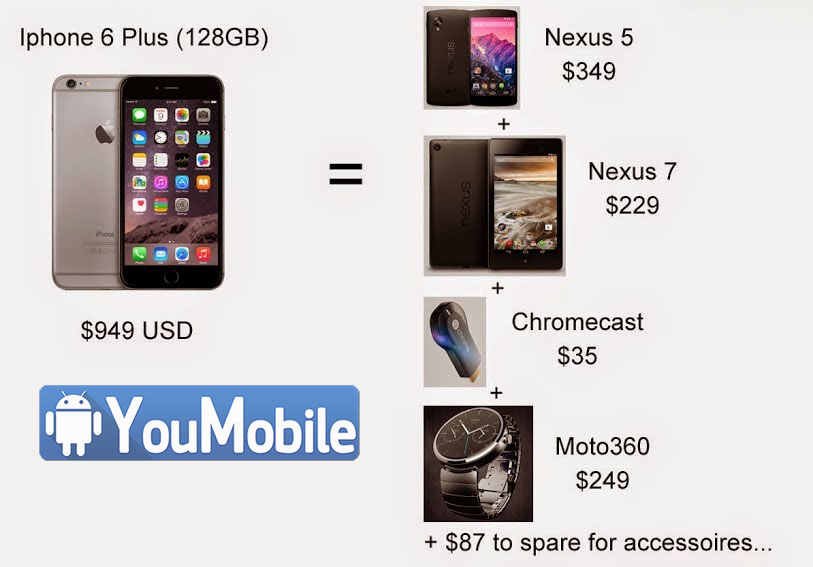 Apple iPhone 6 Plus 128GB variant costs around $949.99 according to the official price list from the Apple US Store. This is the most expensive iPhone Apple ever released to date... The Question is "What Android products you can get with the same price ?".

So, You can get 1 iOS device or a whole Tech-set of Android devices with unlimited customizing options. Your Call!