Asus ROG phone 3 was launched the previous month in India with a single model that comes with 8GB RAM and 128GB storage model. The company is planning to launch another variant with 12GB RAM and 256GB storage starting from August 21. This configuration is exclusively offered via Flipkart. The phone comes with a 144Hz display refresh rate and is powered by the Snapdragon 865 + SoC. Asus took the Twitter to announce that the Asus ROG phone 3 upcoming variants will go on sale in India for the first time on August 21. The device is slightly more expensive than the existing one and will be available via Flipkart. The phone is available in a black color option alone that looks pretty rock-style for its specific audience.

The Asus ROG phone 3 runs on Android 10 with ROG UI on the top. It features a 6.59-inch full HD+ AMOLED display with a 144Hz refresh rate. The phone is powered by the octa-core Qualcomm Snapdragon 865+ SoC, paired with up to 12GB LPDDR5 RAM. Asus has provided up to 256GB of onboard UFS 3.1 storage that doesn't support expansion through a microSD card. ROG phone 3 features a triple camera system on the rear side including a 64MP as a primary camera, a 13MP secondary sensor, and a 5MP tertiary sensor with a macro lens. For selfie images, it features a 24MP sensor at the front of the camera.

The phone is powered by a massive 6,000mAh battery that also supports 30W fast charging. For Connectivity it uses 5G, 4G LTE, Wi-Fi 6, Bluetooth 5.1, GPS/ A-GPS/ NavIC, USB Type-C, and a 48-pin side port. There is also an in-display fingerprint sensor. The phone further offers ultrasonic sensors for the Airtrigger 3 and grip press features. 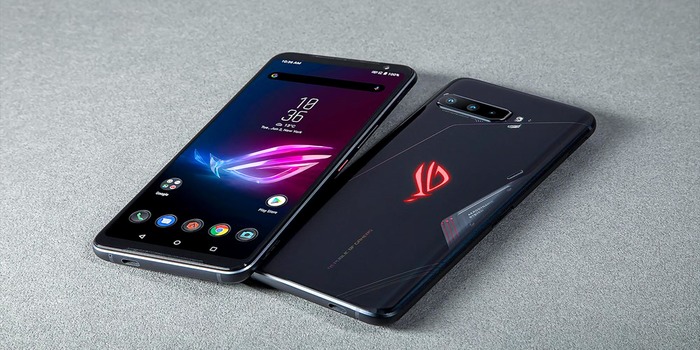 ROG Phone 5 is the 4th generation smartphone in the gaming smartphone series by Asus. The phone is specifically designed for extreme gaming conditions and one of the favorite phones for the ultimate game.The phone has high-end specifications to meet the needs of a high-speed processor, gaming engine, premium visual, and gaming experience. The phone features a large 6.78-inch Samsung super AMOLED FHD+ display. The device is powered by Snapdragon 888 octa-core processor.