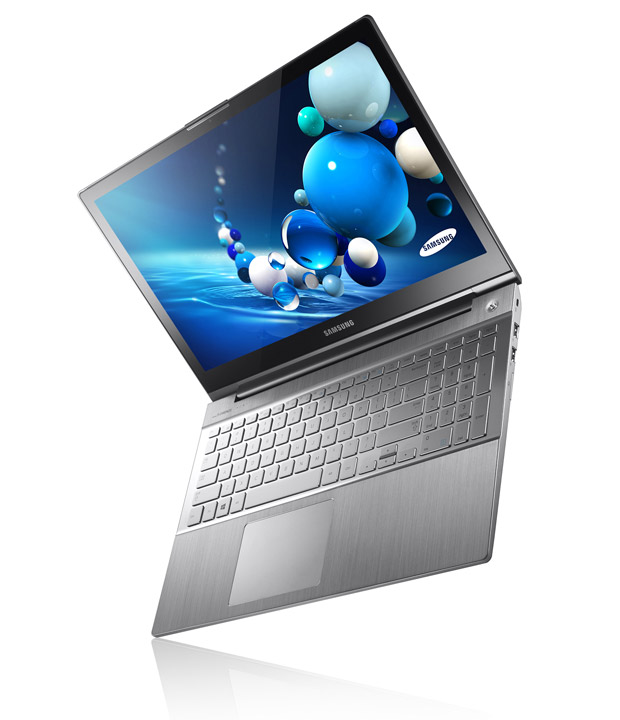 Samsung has announced two new Windows 8 devices which will be released in coming months. The updated Series 7 Chronos laptop will come with high-end specs such as Intel quad-core i7 processor with up to 16GB of memory, up to 1TB of storage and dedicated 2GB external graphics,   up to 16GB RAM, JBL speakers and 11 hours of battery life.

Samsung also announced its new Ultrabook called Series 7 Ultra which is equipped with a 13.3-inch full HD 1920×1080 display with 350nits of brightness and optional touchscreen, choices of Intel Core i5 or i7 processors, optional 4G LTE support, USB 3.0 ports, up to 256GB SSD, AMD HD 8570M GPU, JBL speakers and a battery life of up to 8 hours. 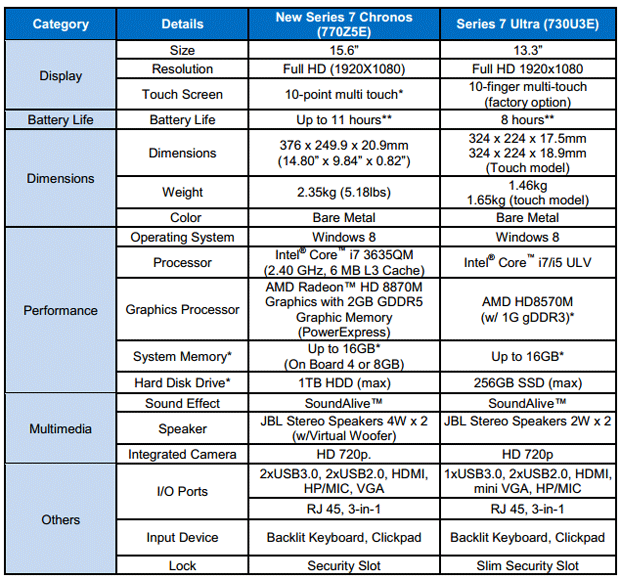 Samsung will announce more details about the pricing and availability tomorrow at CES.

"2012 was a definitive year for Samsung's PC business - we expanded our lineup, taking advantage of the new form factors and consumer demand. This led to significant growth in the industry," said David Song, Senior Vice President of IT & Mobile Communications at Samsung Electronics. "In 2013, we will continue to focus on innovation delivering products that fit into customer lifestyles while maintaining Samsung's high-end design and performance standards. The new Series 7 Chronos and Ultra products are just two examples of what you can expect to see from us throughout the year."

Delivering professional performance in a thinner and lighter form factor, the new Series 7 Chronos provides enhanced processing power for professional users and a new software solution RAMaccelerator**** that provides up to a 150 percent increase in speed for browsing and running apps by taking advantage of the existing memory. Ten-finger multi-touch capabilities enhance the overall experience, allowing the user to interact directly with the screen, as well as the touchpad and keyboard. With a full aluminum body, the new Series 7 Chronos follows the design DNA of its predecessor while packing a powerful Intel® quad-core processor with up to 16GB* of memory, up to 1TB*** of storage and dedicated 2GB external graphics into a slim chassis that measures just 20.9mm (0.82 inches).

The Series 7 Chronos enables creation of heavy content for professional use with increased efficiency and productivity, anywhere and anytime. Catering to the needs of professionals, the new Series 7 Chronos features a high resolution, Full HD display (1920×1080), with 300nit brightness, as well as rich sound with JBL® optimized speakers, enhanced graphics to run hardcore tasks, and an extended battery life of 11 hours**. The laptop wakes up in as little as two seconds and boots in under twelve seconds, making it ready at a moment's notice to access virtually anything the user needs for serious work.

As the first Ultra in the Series 7 family, the Series 7 Ultra embodies superior mobility and performance in an ultra-slim and light, full aluminum body. Designed as the ultimate Ultrabook for multimedia, the Series 7 Ultra offers crisp visuals as well as powerful sound features. Enjoy videos and images on a Full HD display (1920×1080) featuring 350nit brightness, while JBL optimized speakers and AMD® graphics complete the experience. The laptop's display is brighter and wider than previous models and features a 178-degree viewing angle, making it great for sharing multimedia with friends and family, or work content with colleagues.

Up to eight hours of battery life** keeps users connected all day, while the latest Intel® CoreTM i5 or i7 processors and up to 256GB SSD*** of storage provide the computing power required by even the most demanding users. The laptop's ten-finger intuitive touch capabilities and six second boot-up time maximize on-the-go productivity. The device will also be available with 4G LTE connectivity, further enhancing accessibility from anywhere (touch model based). Connecting to other devices is almost never an issue with three USB ports, as well as a LAN port and a slim security slot to help ensure the device is securely tethered when necessary.

Please visit our booth to experience this future technology firsthand. Samsung's product line will be displayed January 8-11 at booth #12004 in the Central Hall of the Las Vegas Convention Center.

Jun Dong-soo, a Samsung executive believes that Microsoft Vista is better than the latest version, Windows 8 and that Microsoft has failed to create an OS that will attract the market back to buying PCs. It is largely said that PC sales have suffered greatly because people tend to purchase tablets and smartphones instead.

According to the International data Corporation, the projected growth of PC sales for 2013 is only about 1.3%. Although it may look disappointing, Microsoft CEO, Steve Ballmer, thinks that this is normal and that people have perfectly taken to Windows 8 on their tablets.

Samsung makes this statement in the wake of cutting production because of falling memory chips sales. Furthermore, Jun Dong-soo observes that demand for Windows 8 is dreary and calls the latest Windows OS a less-competitive platform.

Today, Nokia released a unique app for Lumia Windows Phone devices called Ringtone Maker. This new app will permit users to select their favorite music and set it as their device ringtone. You may also cut the background music to your needs.For the time being, this app is accessible only for Windows Phone 8 devices and is expected to be available for Windows Phone 7.x devices soon.

In the description, it reads:

With Ringtone Maker you can create ringtones from the music on your phone. Simply open the app, select your favourite MP3 song and save it as a ringtone. You can cut your ringtone anyway you like, with editing controls that let you choose the start, end and length of your ringtone.

Chrome OS and Windows Soon to Get Google Now
Applications

Beta tests have been revealed for Google Now integration on the Chrome and Windows browsers, all thanks to Francois Beaufort, who made this possible. However, the URL for the Google Now server hasn't been announced yet, so people who want to try it should wait for a bit longer.

Google Now cards remind you of the things you need to do before you could even think about them and somehow learns which activities and things are most important for you at the moment. Similar rich notifications will be available on our phone once Google Now gets integrated on the Chrome and Windows.

No exact date has yet been said when this update will be released and many people are already excited with the additional things that they can do with the Google Now integrated on their Chrome OS or Windows browsers. This will allow more people to connect better with Google and its services. 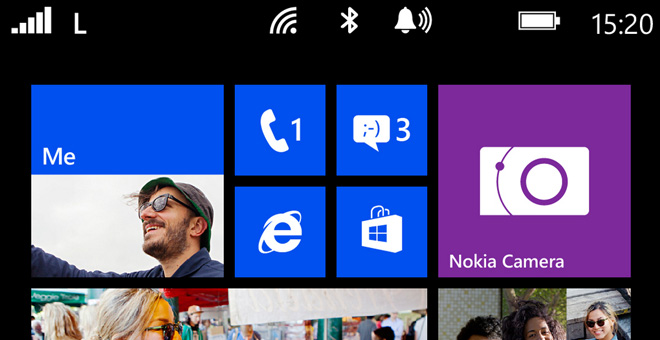