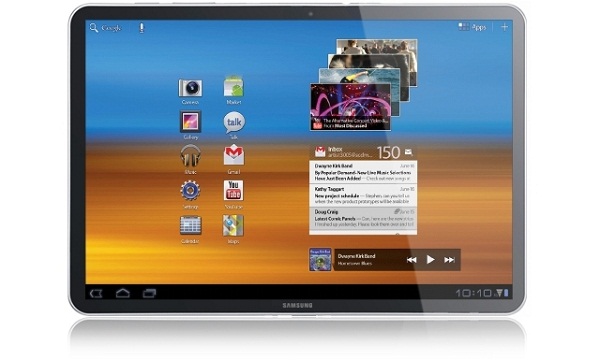 About a week ago, Documents leaked from Samsung Korean based manufacturer indicate a New tablet code named the "P10". The tablet will pack an 11.8-inch display and its said to have a resolution of 2560 x 1600 which confirm a Retina display will be onboard od this new tab.

Today, A Samsung tablet hits the FCC with a Model Name of GT-P8110 and have a 11.8" display which confirm that Samsung is getting ready to release the Galaxy Tab 11.8 very soon. you can check the source link to see the FCC Documents yourself

Now, the Galaxy Tab 2 7.0 Student Edition is said to arrive in Best Buy stores on August 19th, so you'd definitely have a hard choice if you're looking for a no-compromise 7-inch tablet nowadays. Which one would you prefer the Nexus 7 or the Galaxy Tab 2 7.0 with the keyboard and USB connector bundle? 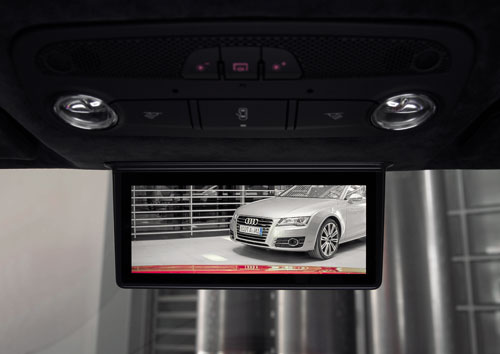 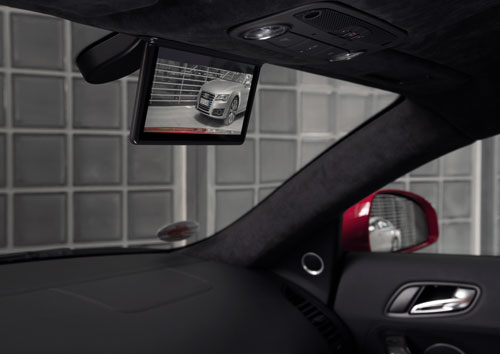 Interestingly, the mirror will be a 7.7-inch AMOLED display supplied by Samsung Display and is selected due to the display's power efficiency, thinness than a regular LCD. 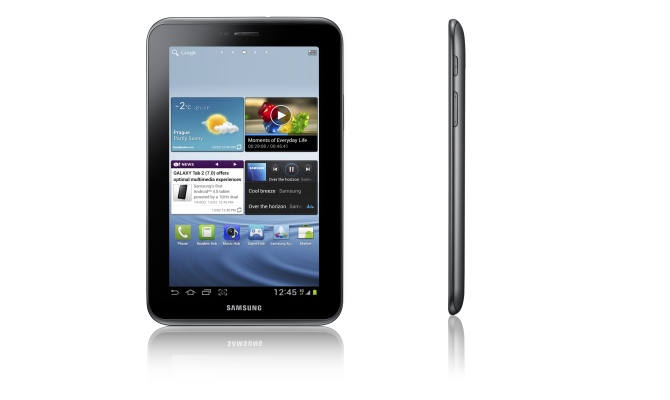 Samsung GALAXY Tab 2 7.0 is expected to launch later this month in the UK and globally released Early Next Month. As for Now, Non of the US Carriers announced if the tablet will hit their line-ups or not. The Galaxy Tab 2 7.0 has just got approved by the FCC today too.

Samsung Galaxy Tab 2 7.0 will have a 7-inch LCD screen with resolution of 1024 x 600 with 171ppi pixel density. A dual-core 1GHz processor is under the hood with 1GB of RAM On the back is a 3MP fixed focus camera that captures video in 720p at 30fps, while a VGA front-facing shooter takes self-portraits and allows you to engage in video chats.

We all saw the Apple New iPad, it has a silly name (new iPad), but a Great resolutionary Retina screen with ( 2048 x 1536 ) pixels, Samsung will not stand-still in front of this, Rumor is going around about a Samsung Galaxy Tab 11.6" with 2560 x 1600 screen resolution with 260ppi which is very close to the new iPad screen but a little bit bigger in the size.

This rumor is based on an unnamed source close to the matter, who confirmed to Pocket-lint that the Samsung Galaxy Tab 11.6 is the upcoming ICS tablet and samsung may show it on the SXSW event on Texas today, but Unfortunately Samsung did not reveal it at the event.

On the surface, those rumors seem plausible Samsung would like nothing better than getting one back at Apple and topping their latest slate with a more attractive offering. If previous rumors are to be believed, the Galaxy Tab 11.6 will feature an Exynos 5250 chipset with a 2GHz dual-core CPU using of the new power-efficient, 32nm generation along with a 2GB RAM.

After Apple and Samsung long war last year, Apple unveiled the new iPad as its first product in 2012. This Morning, Samsung has called a last-minute hearing in Federal Court, sparking speculation the South Korean giant could launch an attack on Apple new iPad.

The company had in fact submitted an interlocutory application calling for Apple to set aside recently submitted evidence in its case on the Galaxy Tab 10.1. 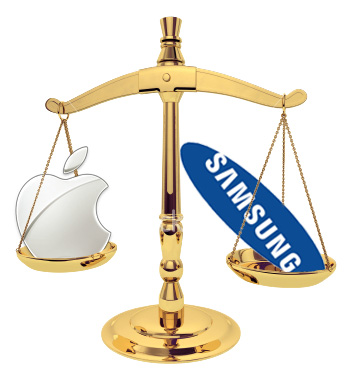 However, the proximity of the hearing to the announcement yesterday of the third-generation iPad has prompted suggestions it could seek to ban the rival tablet sale in Australia before its official launch on March 16. 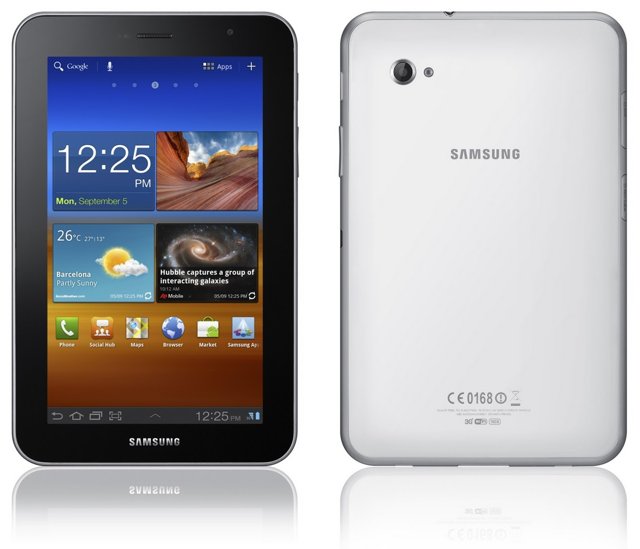 With the Samsung Galaxy Tab 2 (7.0) hitting store shelves on April 22nd, Verizon is looking to sell-off some inventory of the original 7" Galaxy tab. Right now on Verizon website the Galaxy Tab 7.0 is available for $229.99 minus a $180 promotional discount making the device just $49.99 on a 2-year contract.

Just to remind you about its specs, The tab is powered by Android 2.2.1 Froyo and has a 7-inch 1024x600 display, 1GHz processor, 2GB memory, 16 GB microSD card, 3-megapixel rear-facing camera, and a 1.3-megapixel front-facing camera.

Samsung GALAXY Tab 10.1 to pulled from US stores next month because of Apple
Samsung

The war between Apple and Samsung is still going. Recently, Apple won a ruling from the U.S. Court of Appeals for the Federal Circuit, finding that Apple's design-related patent on the Apple iPad is valid. That overturned the ruling made by a California court that prevented Apple from seeking an injunction against the Samsung GALAXY Tab 10.1, Apple filed a motion seeking an injunction on the Samsung tablet which could result in the device getting pulled from stores as soon as next month.

"Circuit Judge Kathleen O'Malley argued that the CAFC should have reversed the decision in order to provided Apple with immediate injunctive relief in light of the irreparable harm it is suffering. But the majority of the judges saw 'no reason to believe that there will necessarily be delay, or if there is delay that it will be unjustifiable.", Said Florian Mueller

Samsung's latest tablets is getting some FREE Cloud Storage via Dropbox, both versions of the recently available Samsung Galaxy Tab 2 7.0 and Galaxy Tab 2 10.1 models, are given new owners 50GB of free storage for the first year. 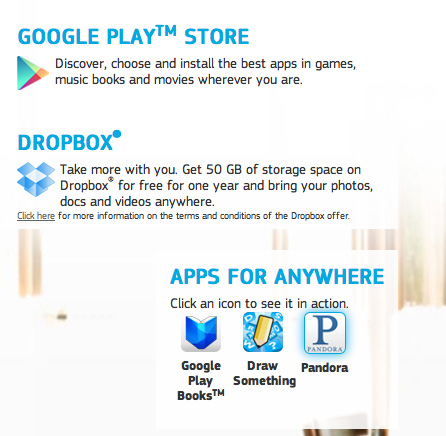 Certainly, that might pique the interest of enough people considering that it's a hefty tally that we don't traditionally offered with devices. Once the first year is over, however, you won't be left out on the curb because Dropbox will still continue to give Galaxy Tab 2 owners a decent 2GB+ of storage for any free account. And if you happen to continue using the tablet for a second year, an additional 3GB of storage will be available to you.

Judge to Ban Samsung GALAXY Tab 10.1 in the U.S.
Samsung

U.S. Judge Lucy Koh has reversed her initial decision and has granted Apple a motion for an injunction against the Samsung GALAXY Tab 10.1 tablet. Lucy had originally turned down Apple's request for the injunction earlier this month, saying that any injunction she grants now could be confusing. Judge Statement :

A federal appeals court remanded the case back to Koh, telling her to reconsider her ruling on the tablet.

Last Month, Apple sued Samsung due to some patents infringements in the Galaxy Tab 7.7... Sadly, it ends badly in court.

Apple scored a victory in its crusade against the Super AMOLED-packing tablet and got its sales banned across the European Union and U.S too. It's up to the members of the EU to decide whether to respect this decision or not though.

Here is Samsung statement regarding the ban:

"Samsung is disappointed with the court's ruling. We will continue to take all available measures, including legal action, to protect our intellectual property rights and defend against Apple's claims to ensure our products remain available to consumers throughout the European Union."

Samsung made a special offer for the current "Back to School" sales for all United States students. Samsung has released a Student Edition of the Galaxy Tab 2 7.0 slate. 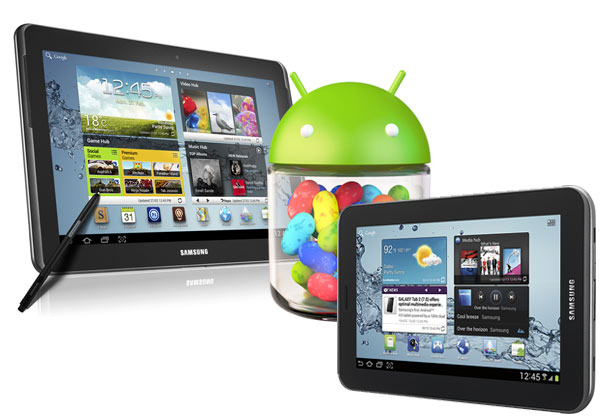 We have Good News for Galaxy Tab 2 (7.0) and Galaxy Note 10.1 owners who is waiting on fire for the Official Android 4.1 Jelly Bean Update. Luckily, the pre-release OTA Jelly bean files has been leaked for the two tablets.

To be more precise, the leaked OTA files are for the Galaxy Tab 2 7.0 (GT-P3100) and the Galaxy Note 10.1 (GT-N8000) and these updates looks very stable after installation, which indicate that the final OTA is very soon. 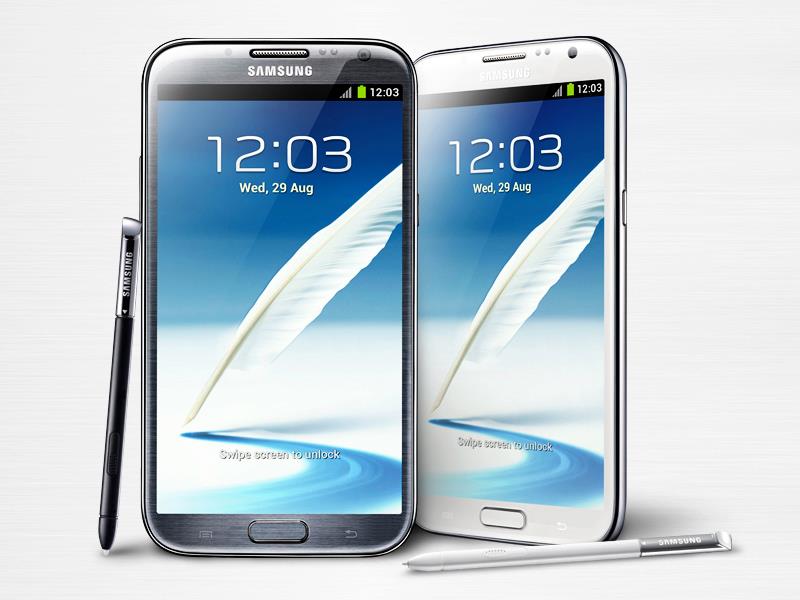 Rumor has it that a cheaper alternative to the Samsung Galaxy Note II is already in the works and will be released on the European market. It might not carry the Note branding, however, as it will not come with an S Pen, according to the source.

It is also speculated that an LCD screen will be used instead of an AMOLED panel. The idea behind this rumored handset is to let a broader range of consumers have a taste of what having a smartphone with a huge screen feels like. How much the cheaper Note II alternative will cost, however, is not being mentioned. 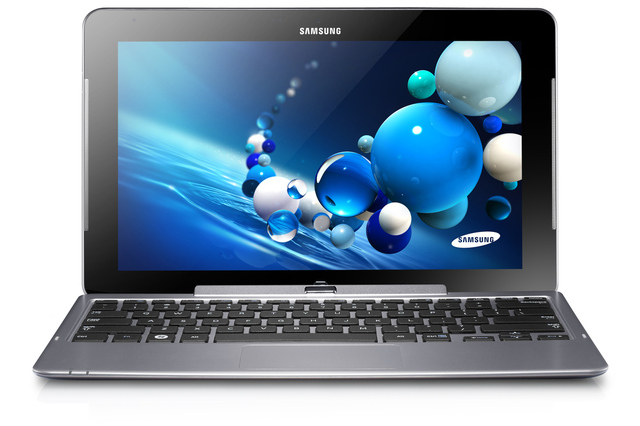 Next up we have a rumor about a 13.3-inch tablet by Samsung that will mimic the concept behind the Asus Transformer series. In other words, the slate will be accompanied by a physical keyboard dock. The dock could also be sold separately, as an optional accessory. Our guess is that this mysterious 13.3-inch tablet will run Android. 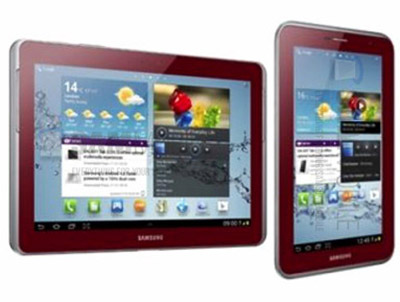 Samsung always brings New colors to the markets to satisfies the needs of its customers. Currently, Samsung is preparing a New color for its latest Galaxy Tabs, The GALAXY Tab 2 7.0 and GALAXY Tab 2 10.1 as well.

The New color for these slates is the Garnet RED, Samsung color that the AT&T Galaxy S III version launched with it. The Garnet Red editions of the Galaxy Tab 2 7.0, Galaxy Tab 2 10.1 and Galaxy Note 10.1 will arrive in time for Valentine's Day next year.

Unfortunately only the 3GZFi slates will get the new paintjob.

Samsung was working on a 11.6-inch tablet. The Samsung GALAXY Tab 11.6 was supposed to launch last month, according to the story, and would be Samsung first model to be shipped with Android 4.0.3 already installed. Now here is where things get interesting. On Samsung web site is an advertisement for the Samsung Exynos 5 processor and it shows someone using an unnamed Samsung tablet. Could this be the Samsung GALAXY Tab 11.6? 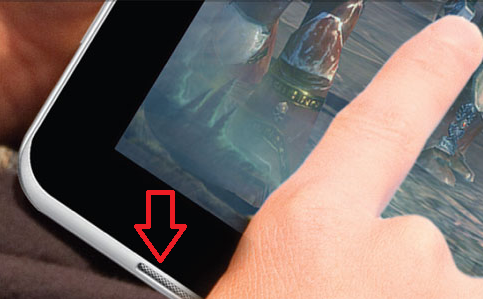 On first inspection, it looks like the Samsung GALAXY Tab 2 10.1, except for the speaker grill (look at the photo above) and the coloring which are both different than what appears on a rendering of the sequel to the Korean manufacturer 10.1 inch model. And the biggest clue of all is that the ad is for the very same 2GHz Samsung Exynos 5250 that is supposed to be under the hood of the GALAXY Tab 11.6.

Other specs include the 11.6-inch display with a resolution of 2560 x 1600 to match the new iPad retina display ppi. We still have no confirmation when samsung will show us this tablet. but as more reports coimng in about a New samsung tablet, we can expect this very soon.

Samsung Galaxy Tab 2 (10.1) will launch with a Quad-core processor instead of a dual-core
Tablets 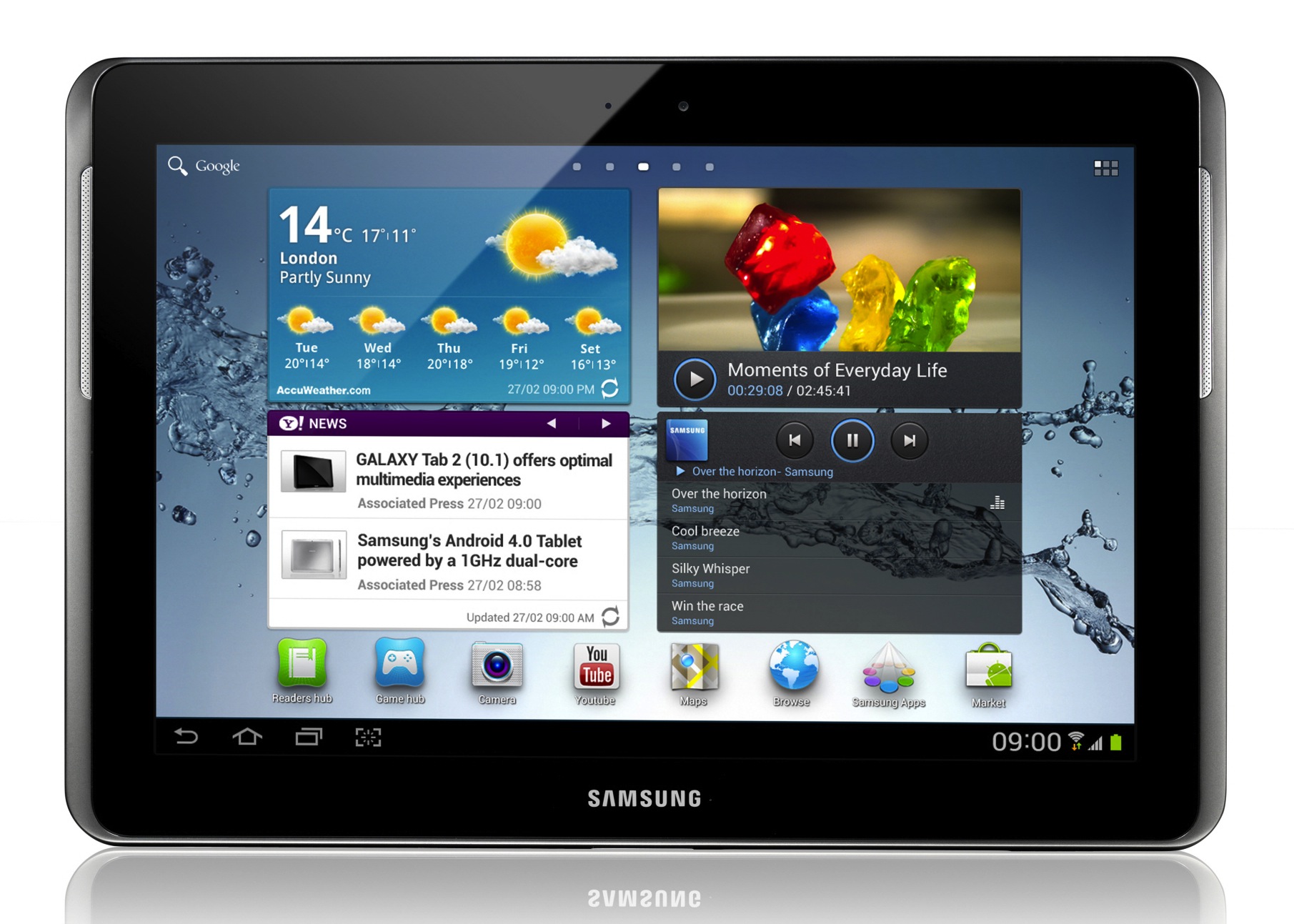 The Galaxy Tab 2 (10.1) was originally reveald on the MWC 2012 earlier this year with a Dual-core processoron its specs, Samsung is rumored to swap this originally planned dual-core processor in the tab with a Quad-core endeavor, so this will inevitably mean some retooling and a bit more testing, hence the launch delay.

Quad-core is good for marketing purposes and as far as production costs go it is not much different than dual-core, especially if Samsung uses its own Exynos processors, but even if it has some Tegras lying around, the difference in assembly price should be insignificant. The 10-incher is codenamed Espresso and apparently scheduled for June launch.

Android Ice Cream Sandwich 4.0 has been one of the updates that users want the most and still can't get for months after the launch. Good news is that Samsung is slowly but surely working on providing the latest of Android on its devices, as Samsung announced that the latest Galaxy Tab family will get ICS 4.0.3 update very soon.

Samsung Canada also confirmed this in a post saying that updates will start in August. Better Late Than NEVER!