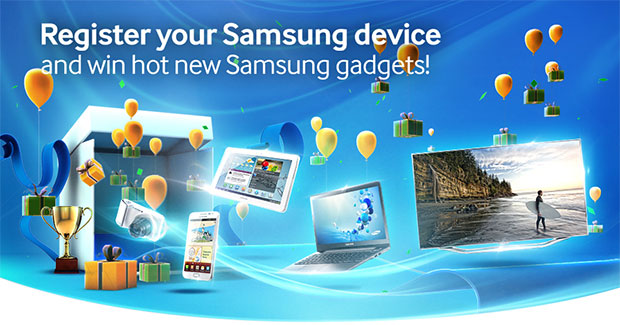 If you own several Samsung devices that support AllShare Play and would want to be able to use your gadgets to their potential, sign up to this cool application that allows you to remotely access everything that you have saved on your Samsung devices.

This February, Samsung will promote AllShare Play-supported devices and will let users try this useful app and get the chance to win several Samsung products such as phablets, tablets, smart TVs and laptops. Users are required to register their AllShare Play device to join the giveaway promo and it is only open to all residents of the following countries: Argentina, Brazil, Canada, France, Germany, India, Italy, Mexico, South Korea, Spain, Turkey, UK, and USA.

Aside from being able to enjoy content on several AllShare Play devices, users can even use content stored in cloud storage such as Dropbox, SkyDrive and SugarSync.

If you sign up for the latest email updates on the Samsung Galaxy S4, you're automatically eligible to win one for free.

To win all you have to do is fill out a registration form with your name, email address, and phone number. To avoid receive any advertising materials, you should un-check the little box, I don't think there will be lots of Galaxy S4 promotional material coming your way, but that isn't necessarily a bad thing.

Whoever can root a Galaxy S5 on Verizon and AT&T will win a $18,000 cash prize
Samsung

For smartphone owners over at XDA-Developers, a new flagship smartphone is as good as useless without root. Just ask the thousands of AT&T and Verizon Galaxy S5 owners in their 7th week of waiting. So far it looks like Samsung, AT&T or Verizon won't offer a way to unlock the device for rooting and in the meantime the community has put up an award for the first developer to find a way to root the Galaxy S5 from Verizon and AT&T. That bounty is currently more than $18,000 in prize.