Realme is making news again. The company seems ready to compete with giants in the mobile manufacturing industry. It has launched a few mobile phones in almost every price category. Its latest smartphone, the Realme X2 is great phone from the company. The Chinese tech startup is also venturing out in the wearable category and has launched true wireless earphones in the Realme Buds Air.

The Realme X2 was launched in China a few months back and has now made its way to Indian market. It is essentially an upgraded version of Realme XT smartphone which was powered by the Snapdragon 712 chipset. In comparison, the Realme X2 gets the snapdragon 730G processor with Adreno 618 GPU. In the indian market, the Realme X2 will face off against the likes of Samsung Galaxy A80, Oppo Reno 2, Redmi K20, and also the Redmi K30 when it launches in the country.

Other specs of the Realme X2 are pretty similar to the Realme XT. It gets the same 6.4-inch full HD+ AMOLED display with an in-display fingerprint sensor to act as the security layer. The phone has a large enough 4,000mAh battery with VOOC flash charge 4.0. This means the phone as a greater charging speed than its predecessor. The device has Android 9 with ColorOS 6.1, but it will be upgraded to ColorOS 7 based on Android 10.

The phone has a 64MP primary camera, an 8MP ultra-wide camera, a 2MP macro lens, and a 2MP depth sensor. The video camera specs is similar to Realme XT smartphone. With this device you can shoot up to 4K videos at 30fps while the 1080 mode goes up to 60fps. The phone is dual sim and has face-unlock feature as well. The Realme X2 is available in peral green, pearl white, and pearl blue colors and weigh only 182g. 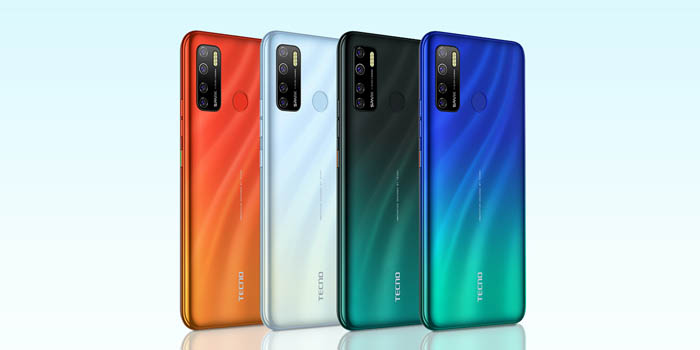 Techno launched Spark 6 Air and mini pod M1 single-ear wireless earbud in India. Both products belong to the entry-level device category and boast an impressive specification for the price. The Techno Spark 6 Air comes with a massive 6,000mAh battery and a 7-inch display. On the other hand, the Techno mini pod M1 can play 18-hours of music with a single charge and comes with IP4 water resistance. Both the spark 6 Air smartphone and Minipod M1 single-ear wireless earbud will be available on Amazon Prime day.

The Techno Spark 6 smartphone is available in single 2GB RAM and 32GB internal storage model for Rs. 7,999. You can purchase the phone in comet black or ocean blue colors. The Techno mini pod M1 is priced at Rs. 799 and available in white color with a multi-color silicone protective case. Both products will go on Sale online and offline from August 6.

The Techno Spark 6 Air comes with Android 10 and HIOS 6.2 on the top. It features a large 7-inch HD+ display with a 20.5:9 aspect ratio. The phone is powered by the MediaTek Helio processor. It comes with 2GB and 32GB expandable storage options that can be further extended up to 1Tthrough a dedicated card slot. The battery is 6,000mAh and enough to keep it alive the whole day even if you are a heavy user. The phone has a triple camera setup that includes a primary 13-megapixel camera sensor and a 2-megapixel depth sensor. The front camera houses an 8-megapixel sensor with an f/2.0 lens. For connectivity, it uses a Bluetooth 5.0. The phone has the environment noise cancellation feature that allows you to have a seamless voice quality during the call.

With a lot of individuals and business entities having to deal with overclocking, having in place the best cooler is an ideal way of ensuring that they keep their expensive and lovingly overclocked processors alive for long. However, looking around, one will realize that liquid CPU Coolers are increasingly becoming widespread, and being tried by many people.

Air Cooling works in a simple way, and only relies on two essential components; a fan and heatsink. Made of highly thermo-conductive materials, the heatsink is mainly a combination of copper and aluminum. The main purpose of the heatsink is to draw heat and direct it away from the CPU. But before the dissipation of heat, a fan is needed, and here, it plays the role of spinning so as to keep some cool air running, and preventing the heatsink from overheating.

On the other hand, Liquid Cooling is slightly more complicated as it requires additional parts that air cooling. Here, a fan, hoses, pump, and radiator are needed. Liquid cooling adopts the same approach as Air Cooling, only that it uses liquid as opposed to air.

Water or any other liquid coolant gets pumped through the hoses that connect the component where cooling is intended, and in this case, it is the CPU. But again, circulating around isn't sufficient, with the liquid requiring its own form of heatsink.

This is where the radiator comes in regarding this type of set up. And to ensure that it doesn't overheat, there's a fan in place that keeps some cool air running over it.

So, which is the best cooler to choose?

As mentioned way back earlier, a lot of people around the globe would go for liquid coolers as their first option. However, this is not to say that air coolers are bad and that people should use them. In fact, they are cheap to maintain, especially for those that are on a budget.

Are you in the market for the best liquid CPU cooler that will serve you well? There are plenty of them that you can find out there. However, some of the best ones around include the following:

This is one of the best liquid CPU coolers that you can find in the market. Even though its installation could be tricky, the good thing about it is that it has got an excellent thermal performance, a bit cheap, and expandable and refillable.

Again, this is another good liquid cooler that a lot of business entities and people use. It is near silent and comes in with a good software. Sadly, its RGB lighting could be a hit or miss, but nevertheless, it's one of the best liquid coolers in the market.

This one is budget-friendly and makes little to no noise when in performance. It also consist of a simple hardware controller.

So there you have it. Liquid Coolers vs. Air Coolers, the choice remains yours. However, looking around, it seems as if Liquid Coolers are the first choice for many users and industries.

BendGate is Back again with the iPad Air 2, Snap in half on [Video]
Apple

Looking back at the whole iPhone 6 Plus #Bendgate debacle, it's impossible for anyone to downplay the incredible effect a single video from a guy who thought it's a good idea to test out the phablet's rigidity generated. In fact so easy was the iPhone 6 Plus to bend that the original clip that started it all racked in views in the tens of millions on YouTube alone a fraction of the total interest generated throughout the web.

It's hard to pinpoint any one single factor that contributes to content's sudden rise to viral status, but in the case of #Bendgate, it probably had at least something to do with the fact that we were talking about an Apple product, Besides, there's just something oddly-satisfying about witnessing the destruction of tech that costs hundreds of bucks as if it's no big deal. But enough with the introduction.

When Apple took to the stage about ten days ago and announced that its new iPad Air 2 will be impossibly-thin, at 0.24 inches (6.1 mm), many of you have probably paused for at least a second to consider the possibility that it, too, will easily bend. Interestingly enough, the first bend test of the iPad Air 2 that we saw just two days ago lead us to think that the Air 2 won't suffer from a similar issue. The slate looked rigid. But another video that followed up just hours later shows a completely different picture not only does the iPad Air 2 bend, but it can be literally snapped in two with just two hands. Check out the Video below!